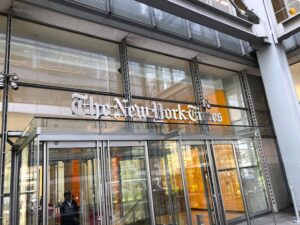 I love the Times. I know that journalism is hard, and deadlines are short. So I when I asked the Times to correct these two false and defamatory statements, I fully expected they would, and I fully expected that would be the end of it. And I so I was astonished when they not only refused to fix the mistake, but doubled down on the absurdity of their justifications. For example: Because I was supporting Joi [Ito, former director of the MIT Media Lab], I was therefore supporting what Joi did. Wow. So if the Times criticizes the assassination of Suleimani does that mean the Times supports what Suleimani did? I was criticizing the scapegoating of Joi. I was not supporting what Joi did.

— Professor Larry Lessig on suing the New York Times for claiming he wrote an essay justifying fundraisers taking money from Jeffrey Epstein. The essay at issue wasn’t exactly clear but it’s impossible to say he was giving a moral pass to fundraising off of Epstein. Still, it’s not really “clickbait” to say Lessig’s article endeavored to suggest how MIT could have best handled its bid to separate a pedophile from his money — frankly, making Epstein poorer without giving him public credit for it sounds like a good thing!

Check out the complaint on the next page…