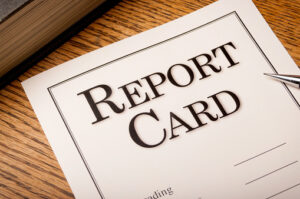 Close-up of a Report Card on a desktop with a mechanical pencil and text book.

Heavy is the head that wears the decanal crown.

The ABA requires a process that reflects meaningful input from law school faculties as part of a dean’s reappointment process. The University of Florida School of Law just underwent its faculty input process and multiple Above the Law tipsters have sent along a copy. From those results it’s clear, there’s some discontent down in the swamp.

When it comes to leading a law school, there are a lot of constituencies to tend to and not all of them are going to be pleased all the time. By any outside measure, Laura Rosenbury has done a fantastic job. Florida jumped up 10 spots in the US News rankings last year and is now functionally on par with Alabama and Georgia when it comes to public law schools in the Southeast. But within the law school, tensions have clearly continued to rise and the leak of the faculty survey reveals a school with a deep trust divide.

One thing pretty much everyone agrees on though is that the Dean is good for Florida’s outside image: 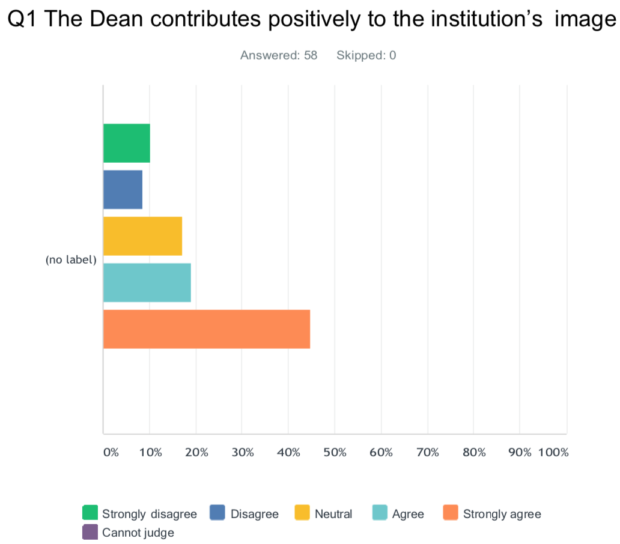 The results for fundraising success and involvement in hiring are equally impressive. And while the rest of the report will definitely distract from these results, it’s worth highlighting them. After all, a dean could have an abrasive management style AND be driving the school off a cliff. 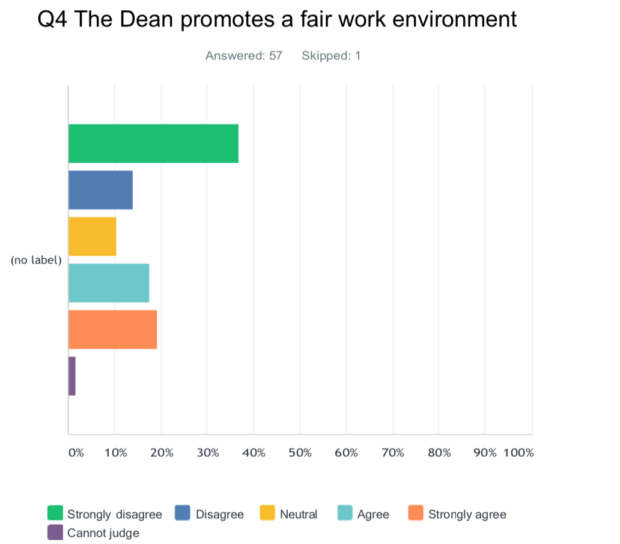 This is a much more damning result. That’s a little more than half the faculty claiming that the school is not a fair work environment and about 10 percent neutral on the question — which is almost as bad.

The Dean does not lead; she bullies and berates. I’ve never encountered a more self-centered, egotistical, untruthful, and revenge-seeking person in my life. The Dean will not even LISTEN to any ideas that she perceives differs from hers. She shuts down conversation, shouts and rants, curses, pounds the table, bullies, and belittles. She will lie to your face. If she were engaging this behavior as a practicing lawyer, she’d be subject to disbarment. It IS THAT bad.

OK, that seems a bit extreme, but management is about maintaining the trust of the team so where a majority of faculty see unfairness and at least one faculty member has this takeaway, there are profound trust issues that need to be resolved.

The Dean needs to push a fresh start button or do something, because working life is becoming intolerable. Many of the Dean’s decisions are timely, but too timely—bordering on rash and careless. The Dean will disregard College policies in order to implement her programs and initiatives. She has literally told me to not worry about faculty policies in the past. She acts first and doesn’t think of the fallout. She will implement new polices or defund programs or move people around or uproot people’s career areas or get rid of classes and programs without talking first to those directly affected—those who could give her insights.

The point about quick decisions “bordering on rash and careless” reminds of the last time Dean Rosenbury made headlines at Above the Law. She had penned a law review piece calling out a law student for branding her “vivacious” at an event, which functioned as a casual micro-aggression because male deans wouldn’t be identified that way. It was a fair point, but also one that with the exercise of any prudence probably wouldn’t have gotten a specific student called out in a legal publication.

After the initial story about Dean Rosenbury’s law review article, tipsters detailed a series of resource cuts to the Florida Law Review that many felt were retaliatory. Whether they were or not, reflections of that episode can be seen in the survey results where respondents complained about the allocation of resources. 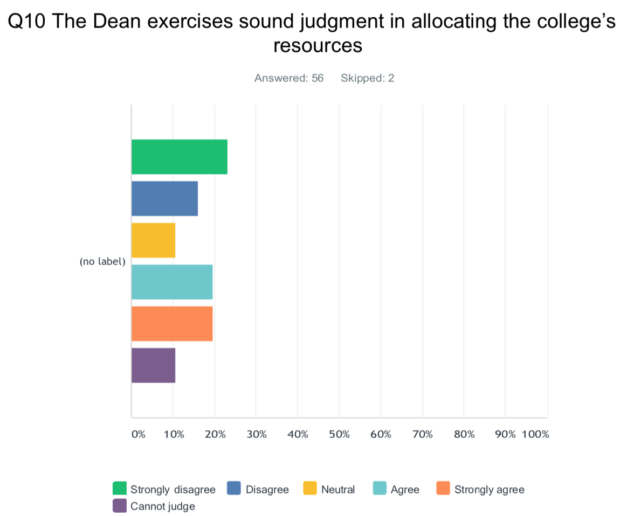 Many comments complained that funds were taken from projects without input from faculty or students who could have shed light on the value of those projects.

Much spending appears wasteful. All new chairs, all new doors, painting and re-painting, new carpet, renovations and much more. We have so many classrooms under-used. The massive increase in scholarships for JDs has attracted a better class on paper, but she provides no credible explanation as to how this is sustainable. Anyone can spend money. Anyone can buy higher rankings. But is it worth it? Is it fair to Florida taxpayers? That discussion has not occurred.

Even the faculty offering more supportive comments are quick to praise the results but not necessarily the method.

The Dean has implemented streamlined procedures and central budgeting that has impacted some individuals and centers, but these changes were both needed and overdue. All has been in service of–and has successfully accomplished–UF’s institutional goals. Could her decisionmaking processes have been more transparent? I’m sure that some would say yes, as she has not always built a broad coalition when change needed to happen and would be uncomfortable.

If you want to make an omelette, you’ve got to break the wills of a few tenured faculty members. Still, it’s possible to make unpopular decisions without losing the trust of stakeholders. When I covered the Florida Law Review controversy, I noted that the Dean’s proposed reforms were not necessarily bad ideas, but implementing them at the cost of poisoning the relationship with the journal — to the extent that people were filing public records requests over it! — wasn’t productive.

It seems as though, in the eyes of a large swath of the faculty, the law review incident was indicative of a broader trend toward making changes without offering transparency or respecting (if ultimately rejecting) input from critics. 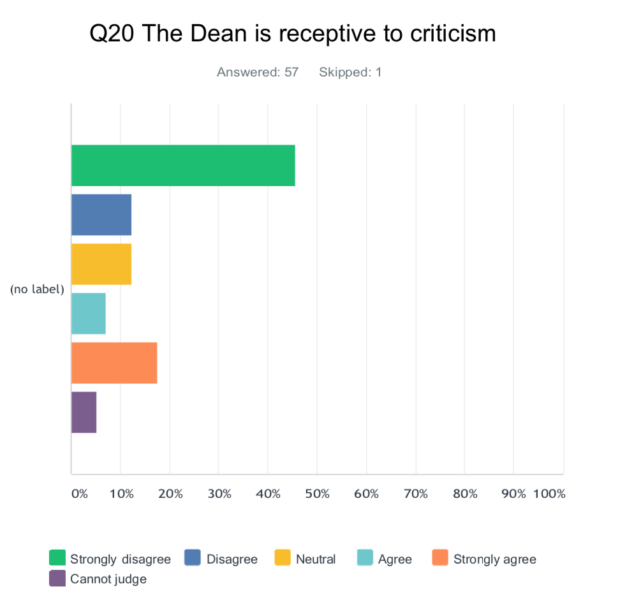 Fewer than a quarter of the faculty believe the Dean is receptive to criticism! It’s easy to conflate “doesn’t agree with me” and “not open to criticism” but it’s a managerial talent to make the distinction clear. It requires listening and engaging other points of view and laying out the thought process behind the ultimate decision. It’s exhausting at times, but it requires almost constant overtures of transparency.

In the interest of fairness, I’m only looking at the four corners of this report. No doubt there’s more to be said and nuances to add, but this is the report as it exists and it has to be judged on how it’s constructed. And what the report reflects, to me, is a dean who built a successful law school while losing considerable faculty support and goodwill. Sometimes managers are great turnaround artists but not ideally suited for long-haul maintenance leadership. If she finds a way to regain the trust of the faculty she should be there for years to come. If she doesn’t, any law school that sees itself primed for a turnaround should seriously consider her talents.

But right now, this seems like a broken relationship.

Earlier: Law School Dean Publicly Criticizes Student In Law Review Article Over A Sexist Remark
There’s A Lot More To This ‘Dean Calling Out A Student For Sexism’ Story
The Most Valuable Lesson Of The Florida Dean Controversy