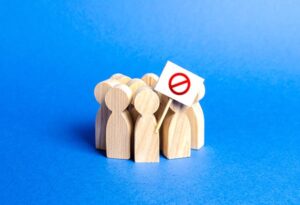 Georgetown Law’s big selling point is its ease in booking high-profile political figures to speak at the school because of its proximity to the halls of power. Allowing students to rub elbows with powerful officials is exactly why a prospective student might turn down an offer from a Michigan or a Berkeley to head to D.C. for the only school in the history of the T14 to… not be there.

But when the administration finds itself holding the bag after at least 38 people including 6 children — and many who work with immigrants at the border believe the officials are understating these figures — end up dead on their watch, students, faculty, and generally decent human beings find themselves less interested in policy puffery. When Acting DHS Secretary Kevin McAleenan showed up at Georgetown for the Migration Policy Institute’s annual event to offer platitudes about the the border crackdown he oversees, protestors interrupted the speech naming the children confirmed to have died under his organization’s watch.

This made the Secretary sad, so he left.

Dean William Treanor’s office sent around an email informing Georgetown Law students that he’s considering changing law school policies to allow for the punishment of students, faculty, or staff who participate in protests:

As you may be aware, after the protest that disrupted Acting Secretary of Homeland Security Kevin McAleenan’s remarks in Hart Auditorium in fall 2019, Dean Treanor re-constituted the Law Center’s Speech and Expression Committee. This year’s committee comprises the students, senior staff and faculty who served on the committee in its two prior years of operation, 2017-2018 and 2018-2019.

Dean Treanor has asked the committee to provide by spring 2020 recommendations on the following questions: (1) Should there be any constraints on which outside speakers may be invited to speak on the Law Center campus and which Law Center community members may invite them?; (2) How should the school respond to disruptive protests during an event?; (3) How should the school respond after a disrupted event has concluded, including possible disciplinary or other administrative action against students, staff or faculty disruptors?

Sadly, we must report “emphasis in the original.” While this is merely an invitation to discuss these issues in committee, one wonders why ominously raise these “questions” at all when the correct answers are no clearly: (1) No; (2) If they’re not a security threat, nothing; and, (3) See the answer to question 2. In response to this email, students have launched an online petition and are organizing to have a presence at a listening session convened by Dean Treanor and the law school’s Speech and Expression Committee tomorrow at 11:30 a.m.

The problem is that the proximity to power that Georgetown enjoys is also why the Beltway cancer is metastasizing there. The culture of Washington, bred over decades of townhouse cocktail parties demands that policy be discussed in detached civility with little — and preferably zero — access granted to those impacted.

Secretary Kevin McAleenan was about to dump a spin job on the room about America still being a nation of immigrants, but one where he takes very seriously his obligation to guarantee that people come here the “right way” whatever that means in a world where they routinely deport people with valid visas. And he’d get away with this whitewashing draped in all the credibility of a non-partisan event at an elite law school. It’s not a matter of hearing “both sides” — he’d enjoy an asymmetric power dynamic blowing off any serious question about how his decisions (and those of his administration predecessors) have materially increased the risk of killing children by holding them in judicially recognized unsanitary conditions. People with a willingness to speak on behalf of the targets of government policies are tired of watching the pantomime.

This is why the snowflake conservatives at Georgetown Law want to have a nice safe space for their civil rights violators to talk. They realize the hack they worked out claiming the rhetoric of free speech to authorize one-way information dumps on “docile bulls**t receptacles.” People are starting to complain. “Free speech” isn’t about letting someone take a podium without criticism. If people in the audience don’t like the protest, then they can shout it down and the marketplace of ideas goes on. The fact that these protests are most often met with apathy from anyone not involved is telling.

The better question is how does a school avoid protests like these in the first place. That’s accomplished by building trust with the students and faculty that the school isn’t handing out credibility chits for public relations talking points. It’s built by creating a culture that makes students feel comfortable that the gatekeepers of these opportunities will take responsibility themselves to tenaciously grill speakers on the issues people care about. That’s not a difficult hurdle to clear, but it’s going to take a concerted effort on the part of the administration and the courage to take the lumps when high profile speakers turn the school down because they’d rather not face scrutiny.

Telling the school that you’re looking for input on how to punish people is not a good start.