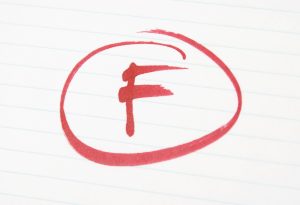 Some law schools are sticking with their original grading policies in the midst of this crisis, either by their own choice or because their Trumpian political overlords demand it. Other law schools have creative solutions like allowing students to beg for Pass/Fail after the fact, earning an accommodation if they give the school a compelling enough story about how COVID-19 impacted them. Why must everything be so difficult in an environment where students are trying to stay alive while their professors try and fail to unmute themselves on Zoom? Judges are already pointing out that no one is going to care what the Spring 2020 grades will be so just make this semester Pass/Fail and focus on just teaching the material rather than trying to properly parse every student by class rank.

So, to recap, there are schools that are still grading, schools that have gone Pass/Fail, and schools that give the student the ability to opt for Pass/Fail if they have a good story. Now comes Notre Dame offering its new twist — allowing students to opt Pass/Fail but only before exams while letting everyone else keep getting grades.

Requiring this to apply to all courses makes some sense. In theory, the reason for the accommodation is a breakdown in the learning environment occasioned by the disease, so it doesn’t make sense to allow “Pass/Fail shopping” among courses. Though in fairness, there are some champ professors out there doing much better with distance learning and, if we’re being honest, some courses that lend themselves better to a less interactive, monologue lecture format. So there probably are some classes that have had more of an impact on the students than others, but weeding through all that is overkill. A blanket policy makes more sense.

But then the school is requiring students to elect which option they want before taking the exams. This is an option in the ASU policy, but at least that policy doesn’t limit students to taking just that route and oh my God, we’re now talking about the ASU policy as a good thing?!?!

The problem with non-blanket Pass/Fail options is it signals to anyone looking at a transcript down the road that the student must have expected to (if the policy requires pre-exam election) or really did bomb (if the policy allows post-exam election) the semester. And “P” from a student of that school immediately becomes suspect instead of giving the future graduate the cover to say, “Who knows whether that was an A or a B that semester because the world was coming to an end — the school made that call for me — the point is I passed so check out my other grades.” This whole thing only really works if it’s a blanket policy.

A Notre Dame student wrote Dean Marcus Cole raising concerns about this policy and got this response:

If the only people that you were competing against for jobs were your classmates, then you would be absolutely right: mandatory Pass/Fail would help to “level the playing field.” Unfortunately, nothing I can do as your Dean, or as a member of your Faculty, can protect you from competition from students at other schools. Of the schools in the “Top 30,” only eight have gone to Pass/Fail (Stanford and Yale have always been Pass/Fail, so they are not making any bold announcements). Of those eight schools, four are making Pass/Fail optional, and the other four are making it mandatory. As of this writing, all eight are ranked higher than Notre Dame. The hard truth is that you are not only competing against other Notre Dame students; you are competing against students from 22 similarly situated schools, all of whom are NOT giving their students a choice of Pass/Fail. They are issuing grades.

So that’s not true at all. For example, of the T14 all but three have gone mandatory Pass/Fail, with Michigan and Georgetown going optional Pass/Fail  after receiving grades and only Chicago sitting out there looking the fool.

But this also misses the point. The dean says nothing “can protect you from competition from students at other schools” but the reality is a blanket policy does offer that protection. Only a blanket policy eliminates any stigma to choosing a Pass/Fail grade. As long as there is an option, every student with a “Pass” looks like they had something to hide.

And don’t lose sight of what we’re really talking about here: “Pass” grades. If students are failing it doesn’t matter if it’s an “F” or a “Fail.” Pass/Fail isn’t letting bad students walk, it’s about protecting otherwise passing students from the vagaries of a curve in a wildly unpredictable time.

Students are not happy — one of the nicer comments described the school as responding “callously, not seriously considering a wealth of student input, brazenly putting the school’s ranking prospects ahead of student interests” — and for good reason.

This all would not be an issue if ALL law schools went to January/February On-Campus Interviews. To date, only one school has formally announced that they will, namely, Columbia Law School. A January/February OCI schedule would allow for schools to adopt a mandatory, across the board Pass/Fail system, because it would afford firms the opportunity to see your Fall 2L grades. With any schools NOT agreeing to January/February OCI’s, firms would fill jobs with GRADED students in August, leaving the students at January/February schools with nothing left. It would be irresponsible of us to put you in that position of false hope.

First of all, this still labors under the misconception that the overwhelming majority of law schools are going mandatory Pass/Fail anyway and that OCI might well be moving to next winter no matter what because the firms themselves are not going to be ready to hire in August.

But it also continues to operate under this goofy conception that employers are going to uncritically hire a B student from one school as opposed to a Pass student from another. Yes, the straight A student is at an advantage over the straight Pass student. But the straight B student isn’t. And with a blanket policy, employers have to consider that every fully passing student might just be a straight A student and they’ll have to actually have an interview to figure out if the student is the right fit (or consider myriad other indicators like first semester grades or law review membership). The point is the only decision that throws students under the bus is the non-blanket route.

Thankfully, there’s still a whole month for the school to take a step back and fix this. Take the time to examine what other schools have actually done and, if OCI is the big concern, take the time to build a coalition with peer schools to push for a winter OCI. There are a lot of options available to the school right now… and very few of them could be any worse.

Earlier: Top Law School Sparks Controversy For Maintaining Grading Curve During COVID-19
When A Law School Says ‘Don’t Contact The Media,’ You Should ABSOLUTELY Contact The Media
Law School Offers Pass/Fail But Only If You Tell Them A Good Enough Story About How COVID Hurt You
Prominent Jurist Tells Law Schools And Gunners To Stop Freaking Out About Pass/Fail Options