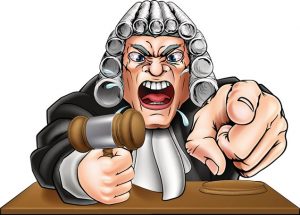 Matthew Rosenbaum served on the New York Supreme Court for 14 years, but was relieved of his duties and vacated his office after state officials began an investigation into allegations of “improper and at times abusive personal demands of court staff, directly or indirectly conveying that continued employment required submitting to such demands, and creating a hostile workplace environment.” The complaint says this has gone on since he arrived on the bench in 2005.

Rosenbaum was named “Jurist of the Year” by the regional New York State Supreme Court Judge’s Association in 2018. Life comes at you fast.

What “abusive personal demands” did this judge make? The proceedings are confidential with the exception of the stipulation which Rosenbaum consented to allow the state to release. We’re guessing it wasn’t using the clerk’s office copier for hundreds of fliers for his garage band.