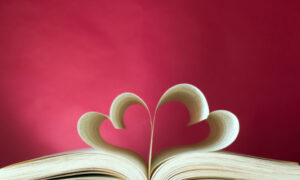 It’s not surprising that there’s an organization like the Romance Writers of America. What’s surprising is that they have an ethics committee. While the Supreme Court continues to operate without any defining code of conduct, goddamned romance authors have an oversight board.

Heidi Bond became the former Ninth Circuit clerk to publicly outline sexual harassment claims against former Judge Alex Kozinski, claims that brought other women forward and ultimately resulted in Kozinski’s resignation. One of the low-key tragedies of Bond’s role in the Kozinski’s fall is that she only had the professional freedom to speak out because she had left the profession already. So many other former clerks who spoke out later had understandable career concerns about crossing one of the stars of the federal bench. But Bond, who had launched a literary career under the pen name “Courtney Milan” could and did get the ball rolling.

Now Bond is embroiled in a dispute with the Romance Writers of America where an ethics complaint accuses her of being the harasser… specifically a cyber “bully.” While the RWA vacillates over whether or not to expel Milan, who once chaired the ethics committee, the whole affair is blowing the lid off a seriously fucked up industry about writing about fucking.

The fact that Milan was then serving as the chair of RWA’s ethics committee was “akin to putting a neo-Nazi in charge of a UN human rights committee”, Tisdale wrote in her complaint, alleging that Milan had “continually and repeatedly” launched “disgusting attacks” against other authors and RWA members.

That’s some throbbing hyperbole. What would possibly make Bond a neo-Nazi?

“She is accusing me of being a racist simply because I am white,” Tisdale wrote.

There are not enough eyerolls in the world for this one.

Bond is in hot, bubbling water barely covering her supple Tweeting thumbs because she pointed out that the romance novel industry is replete with racist stereotypes. As a half Chinese woman, Bond took to social media to label another author’s book a “fucking racist mess” for its depiction of Asian women with “slanted almond eyes” and faces that were “almost yellow.” Defenders of the novel argue that had Bond read more of the book she would have “themes and plot points that establish precisely the opposite of what she claims” which undoubtedly means the heroine — who has blue eyes in the book? — grows beyond these Orientalist stereotypes, which as an arc, is also kind of racist. Normally one would assume that the Asian woman would have a better handle on what might constitute a negative Asian stereotype than a bunch of white women, but that’s apparently not a given within the RWA.

HelenKay Dimon, a past RWA president, previously told The Guardian that she regularly received letters from white RWA members expressing concern that “now nobody wants books by white Christian women”.

The RWA originally ruled that Milan “would be suspended from the group for a year, and barred for life from holding a leadership position.” After an outcry that led to multiple board members of color resigning, the group has rescinded its decision “pending a legal opinion.”

Look, discrimination — both structural and overt — is still rampant throughout the legal profession, but it might well be a diversity utopia compared to the romance novel industry. Bond is like a discrimination fire jumper parachuting from one awful hellscape of a profession into another. Get this woman some kind of medal.

A romance novelist spoke out about racism. An uproar ensued [The Guardian]
The Wrong Kind Of Racy [The Economist]