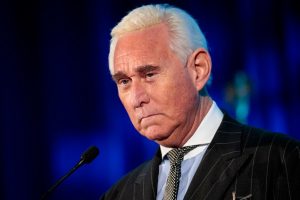 On Friday the aging ratf*cker filed a motion to disqualify Judge Jackson for making an anodyne statement referring to “the jurors who served with integrity.” Thanking juries for their service occurs at roughly 100 percent of American trials, but Stone knows he’ll have to dominate the Fox news cycle if he wants a a pardon from President Couch Potato. So his lawyers seized on the comment as proof that Jackson had already made up her mind about his February 14 motion for a new trial based on claims of jury misconduct.

Stone’s legal team recently remembered that the African-American woman who served as jury foreperson is an outspoken Democrat — information she freely disclosed during voir dire — and are now demanding a new trial based on the well-known principal that only MAGA-hatted Republicans are eligible to sit on juries. Or something.

Anyway, Roger Stone guessed that he could get the President to shit-tweet about Jackson if he filed this bogus motion.

The Court’s ardent conclusion of “integrity” indicates an inability to reserve judgment on an issue which has yet been heard. Moreover, the categorical finding of integrity made before hearing the facts is likely to “lead a reasonably informed observer to question the District Judge’s impartiality.

And he was right.

Is this the Judge that put Paul Manafort in SOLITARY CONFINEMENT, something that not even mobster Al Capone had to endure? How did she treat Crooked Hillary Clinton? Just asking! https://t.co/Fe7XkepJNN

He was probably also right that his insulting motion would provoke a slap-down which the wingnuts could spin as further proof that Jackson just hates poor, innocent Roger Stone. And yet … so, so richly deserved.

Noting that her three-word statement about the jury’s integrity did not amount to a “”finding’ about the pending motion for a new trial, much less a ‘categorical’ one,” Jackson went on to note that an “extrajudicial” statement pertains to information gleaned (or spoken) outside the courtroom, not personal observations during a nine-day trial, during which the defendant’s allies tried repeatedly to doxx jurors and sic the howler monkey brigade on them.

Jackson reminded Stone that, far from being biased against him, she’d let him continue on bail even after he tweeted an image of her head next to crosshairs, given him a sentence well below the statutory guidelines, and stricken 58 jurors for cause. Ahem.

And then, remarking that, “If parties could move to disqualify every judge who furrows his brow at one side or the other before ruling, the entire court system would come to a standstill,” she noted that “like all motions, it was  supposed to ‘be accompanied by a statement of the specific points of law and authority that support the motion,’ as well as a statement of the relevant facts.” AHEM.

After all that throat-clearing, Jackson concluded by calling out Stone’s blatant publicity-whoring.

At bottom, given the absence of any factual or legal support for the motion for disqualification, the pleading appears to be nothing more than an attempt to use the Court’s docket to disseminate a statement for public consumption that has the words “judge” and “biased” in it.

Unsurprisingly, Stone’s motion for recusal was denied. Also unsurprisingly, it played great in Wingnutistan. Third verse, same as the first.