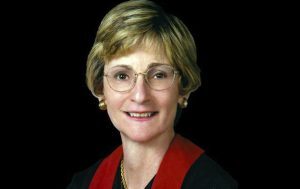 Several years ago, Judge Edith Jones faced an ethics complaint after she went to a University of Pennsylvania Federalist Society event and, according to affidavits submitted by multiple witnesses, said “racial groups like African-Americans and Hispanics are predisposed to crime,” and that the crimes they commit are more likely violent and more “heinous” than members of other ethnic groups. However, there was no recording of the event and Judge Jones was cleared of any wrongdoing saying that she “did not say such things because I have never believed them and have never said them.”

Just keep that complaint top of mind in light of a recent oral argument where Judge Jones offered a little hypothetical.

In Brackeen et al. v. Bernhardt, 18-11479, the Fifth Circuit heard argument en banc in a dispute over the scope of the Indian Child Welfare Act. How far can the United States federal government, acting pursuant to its obligations to Native nations, infringe upon states. It’s an interesting question wrapped up in overlapping sovereignties. In a case like this, it’s entirely fair to ask what powers a state holds over a Native American acting outside federally recognized “Indian Country.”

Because suppose Congress decided that because there’s this understanding — and this is purely hypothetical, not, not, not pejorative — that suppose Congress decided that, uh, Native Americans were particularly subject to alcohol abuse and that when they were off the reservation they got into an excessive number of DUI cases and they were treated excessively harshly.  Could Congress enact a law that established a new sentencing regime for, uh, uh, (quote) Indians defined similar to this who get into DUIs?

At 70, you wouldn’t think Judge Jones needs a free life lesson, but whenever a statement is prefaced with “this is purely hypothetical… not pejorative” the next thing you’re about to say is absolutely pejorative. To recap, Judge Jones is making critical decisions based on some Lone Ranger serials she once heard about “fire water.”

Yeah, it’s hard to imagine why people thought she might have made statements in the past about the genetic predispositions of minority groups.