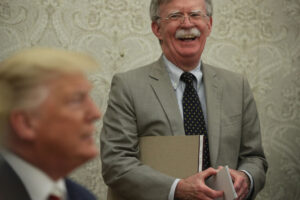 After a “will he or won’t he” game worthy of the laziest Hollywood rom-com, former UN Ambassador and National Security Advisor John Bolton has informed the public that “I have concluded that, if the Senate issues a subpoena for my testimony, I am prepared to testify.” It’s a concession that means… well, probably nothing.

Bolton had danced around his obligation to honor any hypothetical congressional subpoena to testify in the ongoing impeachment investigations (not that defying with congressional subpoenas bears much practical consequence these days). His attorney Chuck Cooper argued in the past that court opinions waving off former White House Counsel Don McGahn’s flimsy arguments didn’t apply to Bolton because his role as a national security figure placed him in a separate bucket than a run-of-the-mill lawyer. The argument that Bolton’s national security conversations deserve separate treatment goes that if executive privilege — the idea that president’s should be able to bounce insane and potentially politically damaging ideas off their advisors all the time without the brainstorming process becoming public — means anything, it definitely means that national security strategizing should be kept under wraps until the administration reaches a final decision. It’s the kind of “protect how the sausage is made” privilege that meant something when presidents might say, “let’s go commit war crimes” in the privacy of the Oval Office before being talked into a new round of mediated negotiations by diplomatic professionals, but probably means less when the exact opposite happens.

Today, Bolton decided to give up that argument, even though the courts never opined on the specific contours of his claim because Dr. Charles Kupperman, who unlike Bolton was actually subpoenaed and advanced this argument, had his case dismissed as moot when the Dems dropped the subpoena rather than let Judge Leon potentially rule against them. Nonetheless, Bolton’s willing to testify now even though he conveniently withheld this decision until after the House passed its articles of impeachment. His new statement even cabins this concession to the existence of a Senate trial.

In other words, Bolton isn’t prepared to help the House uncover more potential wrongdoing — and the House could absolutely draft more articles of impeachment making this a critical distinction — but will spill his guts to the Senate if Mitch McConnell is willing to hold a trial that allows witnesses to testify… which he has no inclination to allow. Bolton’s just fluffing his reputation knowing that he has a remarkably slim chance of being called upon explain what he meant when he called the administration’s Ukraine policy a “drug deal.”

Bolton, who like most war hawks dodged the draft in Vietnam, is all about the cut and run. Today’s announcement is just another in a long line of occasions in his adult life where he talked big armed with the knowledge that he almost certainly wouldn’t have to take responsibility for his decisions.

If the House Intelligence Committee is looking for free advice, they should probably subpoena Bolton today. Trying to square his statement today with a subpoena from the House would put him in an Iraq-level quagmire. His failure to consider the possibility that the House could draft additional articles of impeachment seems to undermine his effort to limit this concession to a Senate subpoena. His efforts to distinguish the two would provide a laugh at the very least.

But it’s a great story to tell. About the day his name appeared above the fold right next to a headline announcing an imminent war with Iran! Everything’s really coming up Bolton.