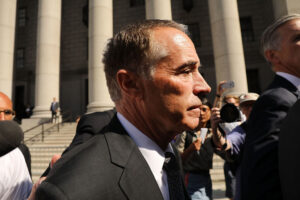 Last September, Rep. Chris Collins (R-N.Y.) resigned his House seat and announced that he’d be pleading guilty to securities fraud and lying to a federal agent.

Collins famously raced out of a White House picnic to call his son and shout, “SELL!” after getting word that the drug he’d hoped would cure AIDS and cancer and MS and probably athlete’s foot, too, had failed its clinical trial.  Which is what those spoilsports at the SEC refer to as “classic insider trading.” Collins went on to win re-election in 2018 despite having an 11-count federal indictment hanging over his head, and proclaimed his innocence and intention to run again in 2020 right up until September 30, 2019, when he finally tapped out.

The U.S. Probation Office is recommending a year and a day in custody for the former politician, which is a significant downward departure from the 46 to 57 months laid out in his plea agreement. But Collins has a better offer — how about no jail time at all! And he compiled a whole 58-page motion with 10 attachments full of letters all attesting to what a good, kind, honest man he is and telling U.S. District Judge Vernon S. Broderick that this living saint deserves to serve any sentence on home confinement at his new house in Florida.

Collins even went so far as to send a mass email to all his supporters — and former supporters, apparently — pleading with them to send letters to the court pleading for leniency on his behalf. This may have been something of a tactical error, however as evidenced by the 88 pages of letters Judge Broderick entered into the docket yesterday. While House Speaker John Boehner may think his former colleague is entitled to leniency, but it appears Mr. Collins’ former constituents have other ideas.

In advocating for a stiff [and] severe sentence for Mr. Collins, including substantial jail time, I can only say this: if this man does not serve an extended period in jail, something is seriously wrong with our judicial system. There’s no one for whom a lengthy period of incarceration is more appropriate. — David Wiles

It is my opinion that he shows no remorse but his actions show only the desire to escape responsibility for his actions. My hope is that the maximum sentence would fit the crimes and damage done. — Harry E. Winnicki

Perhaps that email request was a tactical error.

That would be a reference to Rep. Louise Slaughter, whom Collins described as a “despicable human being” who filed “fabricated allegations” of insider trading against him with the House Ethics Committee out of blinding hatred for Donald Trump. It appears that his former constituent James Renfrew also remembers that, after Slaughter’s death in 2018, “Mr. Collins, vindictively, was the only member of Congress from New York who voted against naming the local post office in her memory. He owes Ms. Slaughter’s family an enormous apology!” That, too, might possibly have been a tactical error.

During his lazy years winning our gerrymandered, 27th congressional district, Mr. Collins made no effort to visit or otherwise personally stay in contact with his constituents. He has used his political power to misrepresent and swindle. Mr. Collins has demonstrated distaste for the rule of law. He’s selfish, profiteering for himself and his family has been on full display diss honoring the Congress. Though his lawyers may plead for leniency, I hope you give him the full measure of his convictions. — Hal Bauer, PhD (PS: Collins stole our trust in the federal government.)

And speaking of profiteering, The Buffalo News reported Monday that Collins appears to have liquidated all the donations from his 2020 campaign account and transferred them to … himself.

But will Judge Broderick be impressed? Or will he heed the recommendation of Cynthia Lankenau, DVM, “to help Mr. Collins clearly see his [serious]  wrongdoing and sentence him to the maximum amount allowable under the statute”? Tune in on January 17 to find out.