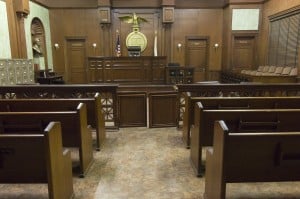 This column is for the newbies among us, now adorned with their shiny bright law licenses, who are headed off to court for their first appearances without having received much (or any) instruction or guidance from whomever assigned them to the appearance. Oftentimes, it’s just a casual hand-off, a “make this appearance for me,” rather than any cogent explanation of what to expect, what to say, and the like. A lot of this advice may sound simple, even stupid, but better to be forewarned and prepared.

Never, ever be late to court. If you are going to be late, call the courtroom and let them know. Most courts will allow you to put over your matter to “second call,” usually 30 minutes to an hour later. Just make sure your court is one of them and that your phone is fully charged. Be early if you can. Make sure you have sufficient time to do whatever you need or want to do beforehand.

Hopefully, by the time you appear, you have business cards to take along.  Don’t forget to bring the file with you, at a minimum the file that has the pleadings and other documents that may be needed. You never know if you will need to refer to something in the file, especially if there’s disagreement about some point.

Find out from courtroom staff if — and I’m sure the answer is “what” — idiosyncrasies the court may have. I still cringe at the memory of taking an exhibit to a witness and walking through the well (the sacred space between counsel table and bench). I can still see Judge Aaron come unglued as I trespassed. I needed to learn that lesson only once.

While at counsel time — by the way, do you know which side of the table to stand behind? Plaintiff’s side is closer to the jury box — never interrupt while another counsel is speaking. Resist that temptation. Stifle yourself. Wait your turn. Don’t be intimidated; if counsel has misstated something, correct it. If the court has misunderstood something, you need to correct that in the most polite, respectful way.

If a tentative ruling has been posted online, make sure you have a copy with you and that you have read it (and understood it to the extent possible, since sometimes tentatives are not models of clarity). If the tentative is in your favor, keep quiet. If not, be prepared to try to persuade the court to change its mind. However, know that the court does not want to have you reargue what’s in the pleadings (so you better have read those). Be concise and address the court’s questions. Don’t blither; answer the question asked. If you don’t know the answer, say so. There’s nothing worse than looking foolish before the court. (Been there, done that.) Make sure you take notes, and make sure you understand all of the court’s rulings.

Never ever argue with the court once it has made a ruling. Don’t storm out of the courtroom in a snit if you’ve lost. Not only bad form, but judges talk (why should they be any different from lawyers?) Courts notice such conduct and file it away for reference next time there’s an appearance on that matter. Court clerks have steel trap minds for remembering behavior, ditto bailiffs, and if you are not respectful to the court, you are also dissing the staff at the same time. Always say “thank you, your honor,” even if “thanks” is not your preferable word choice.

The court will ask whether notice is waived. Do you know what “notice” is? My preference was to never waive notice, and I was always happy to be the one to prepare the notice of anything and everything that was determined at the hearing. I did it because I couldn’t always rely on  opposing counsel to be diligent in getting the notice filed and served, especially if counsel had lost the motion. Yes, I was and still am a control freak, especially in litigation. Aren’t we all?

It’s critically important that the record is clear. What can (and does) happen is that down the road there’s a disagreement as to what the court held at that hearing. The court’s minute order is important, especially if notice has been waived. What’s a minute order? It’s a recap of what happened at the hearing, prepared by the court clerk, and made a part of the record. It’s not signed by the judge; that’s a court order, which oftentimes is prepared by one attorney or jointly and then submitted to the court for its review and signature.

Relax; every attorney (or almost everyone, except for those who have never gone to court) can regale you with war stories about their first court appearances. We survived, at least I think we did, and you will too.

When you get back to the office, find out who should let the client know. If it’s bad news, then it’s good practice to learn how to deliver it. If it’s good news, then relish telling it; that doesn’t necessarily happen very often.