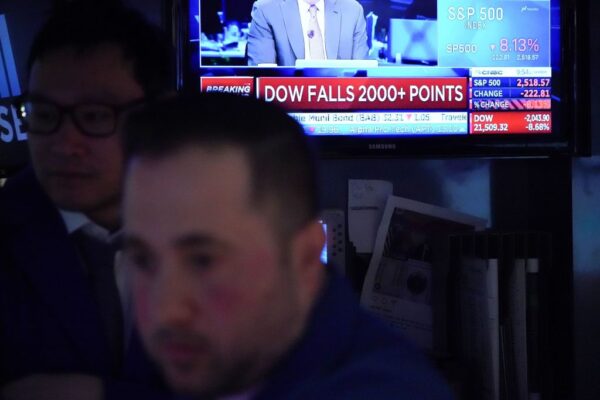 Stocks have taken quite a roller coaster ride this week, mostly coasting downward. On Thursday, the Dow Jones had its worst day since the October 1987 crash, falling 2,352 points, or 10%, when markets closed, as indices like the Nasdaq and S&P 500 entered bear territory for the first time since 2009, The Wall Street Journal reported. That, along with news of layoffs in some industries, canceled conferences and reduced business activity, has triggered fears that a recession may be on the way.

Central to the gloom is Covid-19, which the World Health Organization formally declared a pandemic on Wednesday. Several companies – including biotech and pharmaceutical firms as well as those involved in diagnostics – have announced efforts to develop drugs or vaccines against the coronavirus that causes Covid-19, SARS-CoV-2. Nevertheless the market’s troubles have mostly not spared any of those firms.

Here is a list of companies that have been in the news in relation to the coronavirus pandemic and how they fared when markets closed Thursday.

Quest Diagnostics, one of the largest lab-testing companies in the country, said earlier this month that it would begin to provide testing services for coronavirus. The service is being provided under an emergency use authorization that the company said it would submit within 15 days after it started testing.

LabCorp, Quest’s biggest competitor, also said earlier this month that it would begin offering lab-testing services for coronavirus. In a series of tweets, former Food and Drug Administration Commissioner Scott Gottlieb wrote that “in some respects, our fate rests” on companies with the ability to ramp up testing nationwide, like Quest and LabCorp to fill in the void left by insufficient testing by government agencies and academic institutions.

One of the largest companies involved in making scientific instruments, Thermo Fisher Scientific announced an $11.5 billion deal to acquire Qiagen, a Netherlands-based firm that has been developing diagnostics equipment to test for coronavirus and has been selling testing kits for the Chinese market.

A drug that Gilead Sciences developed to treat Ebola virus, remdesivir, is in Phase II clinical trials in China and the U.S. as a potential treatment for Covid-19, based on preclinical data showing it to be potentially efficacious against coronaviruses and the case study of a patient in Washington state who mostly recovered after receiving it.

Moderna has a vaccine candidate, mRNA-1273, in Phase I development, under a partnership with the National Institutes of Health. However, it has been reported that the vaccine is being tested in people before it has been fully tested in animals, leading to potential concerns about safety.

Vir Biotechnology stands out among the companies on this list as being the only one whose stock price has actually risen, thanks to a partnership with Biogen to develop monoclonal antibodies against the virus announced on Thursday. The company said in February that it had identified potential antibodies against the virus from patients who had survived the 2002-2003 SARS epidemic.

Nothwithstanding the aforementioned announcement by Vir – whose CEO led Biogen from 2010 until 2016 – the main reason Biogen made this list was because of the large outbreak of the virus that it suffered in connection with a management meeting that took place in Boston two weeks ago. As of Wednesday, that outbreak accounted for 70 of the 92 total cases in the state of Massachusetts. The 175 people who attended the meeting have been ordered to self-quarantine.