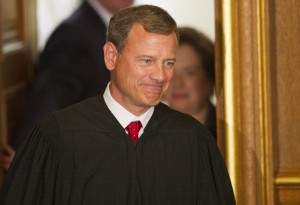 The Supreme Court finally has the dyed in the wool conservative majority that right-wingers have dreamt about since they finally saw Earl Warren put in the ground. There would be no more David Souters. The Federalist Society’s lifetime vetting machine has seen to that. Anthony Kennedy and his squishy “conservatism but not for more friends” judicial philosophy was put out to pasture in exchange for getting jobs for his old clerks. Now was the time to take a good solid run at Roe v. Wade.

It was never going to be taken out in one swoop. Chief Justice Roberts is all about the death of a thousand cuts. But that good enough for most anti-reproductive freedom activists. With Kavanaugh installed and a nice, quiet period where he didn’t have to offer his thoughts on what he wants to do with women’s bodies in the rearview mirror, this was the conservative moment.

Louisiana rolled up with a law requiring abortion providers to have admitting privileges in an explicit assault on Whole Women’s Health and… wow Louisiana might actually lose.

Ian Millhiser’s assessment of the SG’s argument was more blunt:

Obviously, pointed questions asked at oral argument don’t always guarantee an outcome. When the justices retire to their conference in the Highest Locker Room In The Land, rookie Brett Kavanaugh is going to try and sell the Chief hard on his interpretation, clear from the the questioning, that there’s some contrived way to distinguish Louisiana’s case from WWH.

John Roberts doesn’t like WWH. He dissented in that case and generally thinks about as highly of reproductive freedom as he does of voting rights for minorities. But a man has to live by a code and for Roberts that code is not to make the Court look like a collection of partisan hacks that overturns decisions year to year based on the composition of the Court as opposed to any “laws” or “facts.”

Roberts wanted that answer from Louisiana SG Elizabeth Murrill (or alternatively the Trump administration’s representative Jeffrey Wall). He’s just out here begging these states to give him the hook to claim that the Court isn’t wildly shifting from precedent to precedent based on political whim. How hard is it to give the guy what he wants? Is it possible the true hacks are just so wrapped up in their own ideology that they can’t bring themselves to step away from their righteousness and give Roberts the mealy-mouthed, lawyerball response he craves? Or maybe there’s just no good way for Roberts to deliver on the conservative promise without compromising the integrity of his vision for the Court.

Make no mistake, the Chief still wants to uphold this law and if he can come up with a solution to his conundrum he’ll take it. But for now, what appeared to be a surefire win for conservatives is looking like a tossup and that’s a stunning turn of events.