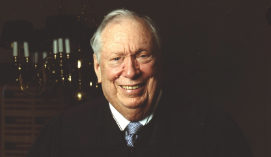 Olivia Warren clerked for the late Stephen Reinhardt, known as the liberal lion of the Ninth Circuit, from 2017 until his death in 2018. Today, Warren testified at a House Judiciary subcommittee hearing on sexual misconduct in the federal judiciary about the judge’s shocking behavior while she was a clerk.

As she noted in her written testimony, Warren said she was not looking “to destroy Judge Reinhardt’s legacy, to erase his significant contributions to the law, or to condemn him.” However, her oral testimony noted, “I saw the bad in him,” saying Reinhardt was “a judge who demeaned his employees, a man who demeaned women, and a man who sexually harassed me.” That’s a hard thing to reconcile with anyone’s idea of a progressive champion.

The allegations in Warren’s testimony are downright shocking. Here are some of the worst ones:

“Culture change starts with the recognition that the judiciary is more than just its judges, and that protecting powerful judges from accountability and embarrassment is not the same as protecting the integrity of the judiciary, especially if it leaves law clerks and other employees more vulnerable to misconduct,” he said.

You can watch Warren’s testimony below, which begins at the 34:22 mark.