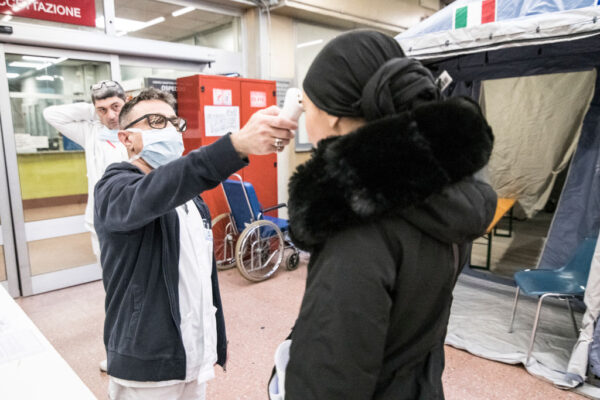 A healthcare worker tests a woman’s temperature at a hospital in Turin, Italy. Northern Italy’s Lombardy region has seen a large outbreak of the SARS-CoV-2 virus.

As of Tuesday, more than 80,000 people around the world have become infected with the novel coronavirus, originally designated 2019-nCoV and now called SARS-CoV-2, according to the World Health Organization. The overwhelming majority of those cases – and the estimated 2,700 deaths – are in China, particularly around Wuhan, China, where the virus was first detected. However, large outbreaks in South Korea, Italy and Iran have fueled fears of a potential global pandemic, and the Centers for Disease Control and Prevention has said an outbreak in the U.S. is inevitable.

Government health authorities and drugmakers have quickly mobilized to develop drugs to treat patients with COVID-19, the disease caused by the virus, and vaccines to prevent infection. While it will likely be some time before the Food and Drug Administration approves one, several clinical trials are underway. The following are some of the companies that either have product candidates in the clinic or have announced partnerships to develop them with the U.S. Department of Health and Human Services.

The company said on Monday that it had released the first batch of its investigational vaccine, mRNA-1273, for use in a Phase I trial among healthy volunteers. A page for the trial was posted on ClinicalTrials.gov the next day, with the National Institute of Allergy and Infectious Diseases – part of the National Institutes of Health – acting as sponsor. The trial page gives an estimated start date of March 6, though NIAID Director Anthony Fauci told The Wall Street Journal Monday that it could start in April. One site, run by Kaiser Permanente, is listed.

Based on mouse studies showing that an investigational Gilead drug, remdesivir, has broad-spectrum activity against coronaviruses – particularly the SARS and MERS viruses – followed by a report of a COVID-19 patient’s symptoms resolving after taking it, there are now multiple clinical trials testing the drug in patients infected with SARS-CoV-2. The most recent one is a Phase II study that just opened at the University of Nebraska, sponsored by the NIAID, and other studies had previously been initiated in China.

J&J’s Janssen subsidiary is one of several companies that have partnered with HHS’ Biomedical Advanced Research and Development Authority (BARDA), part of the Office of the Assistant Secretary for Preparedness and Response (ASPR), to develop vaccines and drugs for the COVID-19 virus. HHS said in a Feb. 18 announcement that BARDA and Janssen would work together to identify drugs that can be used to reduce the severity of COVID-19 illness and treat infections. HHS said the company would also identify compounds with activity against the virus. Prior to that, J&J Chief Scientific Officer Paul Stoffels said in a Jan. 27 interview with CNBC’s “Squawk Box” that the company was “pretty confident” it could develop a vaccine and had begun working on one two weeks prior. Janssen will work with the Rega Institute for Medical Research in Leuven, Belgium, to screen compounds.

Also on Feb. 18, HHS said it had partnered with French drugmaker Sanofi to develop a vaccine against SARS-CoV-2. Under the partnership, BARDA is providing its expertise and allocating money to fund the vaccine’s development, while Sanofi is using its recombinant DNA-based and egg-free vaccine development system to produce a vaccine candidate. Sanofi and BARDA have had a partnership to develop vaccines since 2004.

Like Sanofi, Regeneron is another company that had an existing relationship with BARDA, dating back to 2014. HHS said Feb. 4 that the two would use part of Regeneron’s VelociSuite monoclonal antibody discovery system to rapidly look for mAbs against the COVID-19 virus. The technology platform was previously used to develop monoclonal antibodies against the Ebola virus, used in a recent outbreak in the Democratic Republic of the Congo, and the MERS coronavirus. The system, HHS said, helped shorten processes like antibody discovery and selection and manufacturing for preclinical and clinical studies.