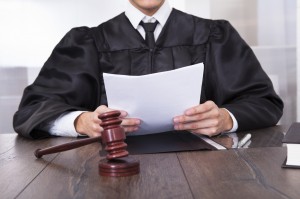 Good tidings and joy!  Time with family!  And no one reading Above the Law. (Hi, Mom!)

This gives me my annual opportunity to veer a little off-topic with my column.

Consider judicial partisanship. I was recently reading some articles about the hyper-partisan cases making their way through the court system — cases involving the various subpoenas seeking President Trump’s tax returns, legislative attempts to obtain Trump’s tax returns, the Emoluments Clause, funds to build “the wall,” that sort of thing.

As I was reading those articles, I was struck each time by a desire to know who had appointed the judge (or judges) involved in the case. Were the judges Reagan appointees? Bush I or II? Clinton? Obama? Trump?

If the articles didn’t tell me who had appointed the judges, then I thought a relevant point had been omitted: Surely this mattered, and shame on the reporter who had failed to provide the information.

Then I realized that this was the first time in my life that I’ve thought that the identity of the president who appointed the judge was relevant to a judicial decision.

In the past, I was certainly aware of the implications of who had appointed judges. Republican judges were generally seen as more pro-business, for example, and Democrats as more pro-consumer. But I never thought that an article describing a case had omitted a relevant fact if it hadn’t disclosed the identity of the appointing president.

In some of today’s cases, I do.

I’m a pretty firm believer that, although judges are inevitably shaped by their life experiences, judges can cast aside their party affiliations when they don their robes. A serious person can focus on the facts of a case and ignore its political implications.

If even I — a believer in judges’ ability to remain neutral — am now keenly interested in the political affiliation of a deciding judge, then something has changed in society.

I suppose there are three possibilities: First, some of today’s cases may be more fiercely partisan than the cases that I’m remembering from my past.  Many cases — business disputes, breaches of contract, and the like — involve no partisanship at all. Some cases — criminal cases, civil rights disputes, and so on — might involve partisanship at a very general level. Even politicized cases — abortion, gay rights, the death penalty — don’t seem to involve as pointed partisanship as today’s cases involving Trump, on the one hand, and Democrats, on the other.

Maybe I’m right to care about the identity of the judge in today’s cases, just as I was right not to care in the past.

Second, maybe I’m simply forgetting some past cases in which I was deeply interested in who had appointed the presiding judge — maybe some Clinton-era cases that seemed partisan? If I’m finding political meaning in what is actually a failure of recall, then society is safe.

Still, the fact that I’ve developed this interest disturbs me.

Something has prompted this: The nature of the disputes; the press coverage; divisions within society; something.

If others, like me, are developing a feeling that judicial party affiliation matters more today than it did in the past, then the judiciary is losing a form of societal respect that we may be sorry to see interred.

Despite that, enjoy the holiday season!

Mark Herrmann is the Chief Counsel – Litigation and Global Chief Compliance Officer at Aon, the world’s leading provider of risk management services, insurance and reinsurance brokerage, and human capital and management consulting. He is the author of The Curmudgeon’s Guide to Practicing Law and Inside Straight: Advice About Lawyering, In-House And Out, That Only The Internet Could Provide (affiliate links). You can reach him by email at inhouse@abovethelaw.com.