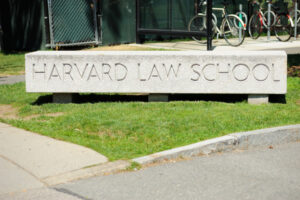 Over 1,000 signatures now grace a petition directed at the Harvard Law School Administrative Board, a testament to how law students really can identify procedural unfairness when they see it.

The petition demands the Administrative Board call off its investigation of three students who engaged in a silent protest during the school’s 45th Annual Fall Reunion on October 26. The Harvard Prison Divestment Campaign organized the protest and the students involved complied with the school’s Orwellian “Protest and Dissent Guidelines” during the event and went on about their lives for months after the fact.

In February, the students were informed that they were under investigation, but to date, the school hasn’t even bothered to provide the students with the evidence against them. As they study for finals and prepare for their uncertain careers in the middle of the pandemic, Harvard officials seem more occupied with making sure they’ve properly quieted all dissent by keeping protesters in limbo.

To this day, not a single administrator, a single professor, a single disciplinarian has ever stated what action exactly that I have taken that may have violated the guidelines,” [Amanda] Chan said. “Yet here I am 182 days later, still under investigation, still unsure if I’m going to be able to graduate on time, still unsure if I’ll even be charged in the matter.”

It’s difficult not to see the arbitrary move to dig into this protest months after the fact as tied to the January protest at a Paul Weiss recruiting event calling on the firm to ditch its ties to Exxon. Facing increasing activism, heading into the archives to gin up investigations of students with the propensity to launch even fully compliant protests might be one method to lean on anyone eyeing graduation as a protest site or something. Perhaps that’s overthinking it, but the school could defuse these connections pretty easily by just being upfront.

But, again, it’s encouraging to see so many students come together to sign this petition. It’s not like the divestment initiative is necessarily supported by the vast majority of Harvard students — if it were, there wouldn’t only be three students in this matter — but even folks who have never considered the prospect of the school’s investment in private prison companies can respect a railroading when they see it.

And this whole thing is going to make a few more students take a look at exactly what the Divestment Campaign is all about, meaning the Administrative Board unintentionally gave the protest even more exposure so at least there’s something good coming out of it.