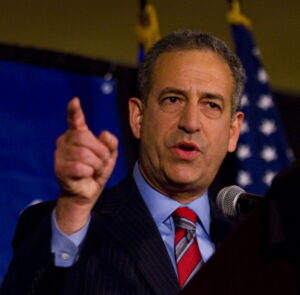 It’s always been a little unfair to characterize the American Constitution Society as the “liberal Federalist Society” because while both hold events inviting speakers to law school campuses to discuss the law, ACS stops short of sucking in massive dark money donations to dictate and push judicial appointments for the administration. Even though Leonard Leo has departed from day-to-day management of the entity to raise even more shadowy money, the organization continues to collect big checks and turn that money into big influence while pretending people are stupid enough to believe it’s “a network that connects thousands of scholars, students, and lawyers” that just love Chick-fil-A.

To the extent the gap between the influence of ACS and the Federalist Society springs from the latter’s commitment to raising massive amounts of cash while not disclosing its donors, it’s somewhat poetic that ACS will put the issue of the dangers of unlimited and unaccountable fundraising in politics front and center through the choice of its new president.

Former Wisconsin Senator Russ Feingold, best known for his work trying to clean up campaign finance — before the Supreme Court reversed 100 years of precedent to help out the FedSoc donors who invite them on hunting trips — will take the leadership role.

In addition to basically being a permanent subtweet, installing Feingold as the face of the organization boosts the group’s profile with a veteran of the Washington media market to shop to picky bookers. It shouldn’t matter who the head of ACS is when looking for an expert to discuss the impact of a Supreme Court opinion, but unfortunately that’s the world we live in.

“We couldn’t be more excited to have Russ join us at this pivotal time for ACS,” said newly elected ACS Board Chair Peter Karanjia. “Every day brings new challenges to our democracy and I’m confident that, under Russ’s leadership, ACS will be well positioned to meet those challenges. Russ’s integrity and intellect command respect from all corners of the legal and policy community, and his track record of working collaboratively with diverse stakeholders to uphold our constitutional values makes Russ an ideal choice as ACS begins a new chapter ahead of its 20th Anniversary.”

ACS will never truly be “liberal FedSoc” for a lot of reasons, but perhaps Feingold’s first project at ACS could be developing a good brand name for a “liberal Originalism.” If anyone understands the value of a catchy phrase it would be a former politician.

Earlier: Man In FedSoc In Denial About What FedSoc Is Actually About
Leonard Leo Launches Exciting Plan To Save Judiciary With *Even More* Dark Money
Supreme Court Takes Aim At Scalia ‘Originalism’ Opinion Promising Even ‘Originaler’ One Now That Republicans Want A Different Result