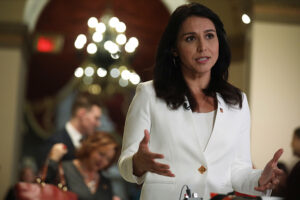 Here’s your daily reminder, courtesy of U.S. District Judge Steven V. Wilson, that the First Amendment does not apply to corporations.

The presidential campaign for Hawaii Rep. Tulsi Gabbard (D-Fantasyland) sued Google in July for temporarily suspending its Google Ads account for a few hours after the June 26-27 debates, a “restraint that had been placed on Tulsi’s speech—at precisely the moment when everyone wanted to hear from her.” The company further suppressed Gabbard’s speech by #Rigging Gmail to send “communications from Tulsi into people’s Spam folders at a disproportionately high rate.” At least according to the complaint filed by her lawyers at Pierce Bainbridge, which also represents the congresswoman in her defamation suit against Hillary Clinton.

“Google is not now, nor (to the Court’s knowledge) has it ever been, an arm of the United States government,” Judge Wilson writes with barely concealed contempt, citing the 2019 SCOTUS holding in Manhattan Cmty. Access Corp. v. Halleck, affirming that “the Free Speech Clause prohibits only governmental abridgment of speech. The Free Speech Clause does not prohibit private abridgment of speech.”

And NO, hosting campaign ads doesn’t magically transform Google into a government actor. By that tortured logic, every media outlet and website in the country becomes a state agent.

Nor was the court persuaded by Gabbard’s reasoning that Google’s efforts to protect itself from cyber-intrusion implicate “national security,” thus constituting state action for the purposes of the First Amendment.

Plaintiff’s “national security” argument similarly fails. Google protects itself from foreign interference; it does not act as an agent of the United States. Nearly every media or technology company has some form of cybersecurity procedure. Under Plaintiff’s theory, every media organization that took steps to prevent foreign cybercrimes could potentially implicate the First Amendment.

Gabbard’s suit is “dismissed with prejudice” and, for good measure, in case her illustrious counsel is feeling as creative about civil procedure as they are about the First Amendment, “without leave to amend.”

Anyone else getting the impression that federal judges are getting pretty tired of these bullshit fundraising campaigns disguised as defamation suits and First Amendment suits clogging up their dockets? Devin Nunes, take note!