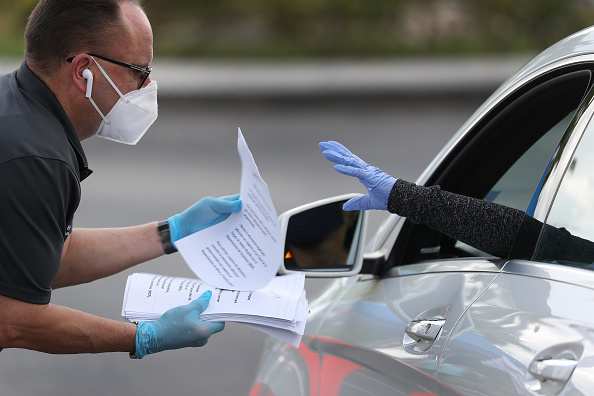 Eddie Rodriguez, who works for the City of Hialeah, Florida, hands out unemployment applications to people in their vehicles. The city is distributing the printed unemployment forms as people continue to have issues with access to the state of Florida’s unemployment website. Photo credit: Joe Raedle, Getty Images.

The true cost of the Covid-19 pandemic is nearly impossible to quantify. The human toll, surpassing the Vietnam War last week at 60,000 deaths, is difficult to comprehend. The number of people who have lost their livelihoods, at 30 million, is as yet incomplete, as many face long waits to file for unemployment. And we still don’t know the long-term effects on the economy or how the crisis will end, as experts warn that the novel coronavirus may well return in the fall.

But health insurance companies are less worried about the cost of the pandemic. As they prepare premium rates for 2021, a bigger problem than the cost of care will be the uptick in uninsured.

“The reality is that once we get the pandemic better under control, there’s a very real concern that there is going to be a longer-term economic downturn,” said Jocelyn Guyer, a managing director with Manatt Health. “The question of where people are getting coverage is going to be with us for a long time.”

How much does covering Covid-19 cost?
Calculations on the cost of care for the average Covid-19 case vary by a wide margin. One estimate by Covered California pegged the average cost per admission at $72,000, with patients admitted to the hospital staying for an average of 12 days. Less sick patients can rack up $600 in the average cost for an outpatient visit.

Centene CEO Michael Neidorff said the company had not yet seen enough claims data to estimate the average cost of Covid-19 treatment for Medicaid patients.

“It’s not been significant. It’s been more the testing — and we haven’t seen a lot,” he said during a Tuesday earnings call.

Even with most insurers covering out-of-pocket costs for Covid-19 testing and treatment, they may see savings in the end as patients suspend other care during the pandemic. Healthcare providers from orthopedic surgeons to dentists were forced to cancel all non-emergency procedures for the last month. Analysts with Moody’s Investors Service estimated insurers will see a decrease in utilization between 20% and 40% per month from non-essential procedures.

The postponed hip replacements and stent procedures are expected to come back, but when that will happen is anyone’s guess. Some states have already begun to lift restrictions on healthcare services, but patients, worried about getting sick, may still be hesitant to seek care.

“If you think about yourself personally, you wouldn’t feel comfortable walking into a hospital, a dentist’s office or an outpatient facility. When you think about the higher risk folks that need cardiac [surgeries] done, they’ll come in first,” Moody’s Assistant Vice President Stefan Kahandaliyanage said in a phone interview. “You’ll have this gradual pacing. We don’t expect a huge comeback of patients.”

Whether or not the cost of Covid-19 treatment will inflate premiums next year is still up in the air. Covered California estimated that premium increases could range from 4% to 40% next year, though the latter would be a high estimate.

Rita Numerof, co-founder of healthcare consulting firm Numerof & Associates, said she expected to see rate hikes next year, as insurers anticipate cancelled procedures will be rescheduled. But if premiums are too high, “I think there will be enormous pushback from businesses,” she said.

Dean Ungar, a vice president and senior credit officer with Moody’s, said it depends on how the rest of the pandemic plays out.

“It seems like we’re more on the mild side of things, but we don’t really know yet,” he said. “We don’t know what happens when we start to relax social distancing and lockdowns. It’s a little bit early to say.”

Where will people go for insurance?
The bigger question, for the moment, is where people who have lost their coverage will go for insurance. As many as 35 million people — including workers and their families — could lose employer-based health insurance during the pandemic, according to a report by Health Management Associates. As a result, Medicaid enrollment would increase by 11 million to 23 million, and another 1 million to 2 million people would get individual insurance, largely through the ACA marketplaces.

States that manage their own ACA marketplaces are reporting a boost in enrollment. Since many of them have also opened special enrollment periods that allow the uninsured to get coverage, it’s difficult to know how much of the increase is from people who recently lost jobs.

“That’s going to be an important lifeline for folks,” Manatt’s Guyer said.

On the other hand, the federal government has not opened a special enrollment period for HealthCare.gov, meaning that in many states, people who were already uninsured couldn’t gain coverage through a marketplace plan. For instance, if an Uber driver lost their job, they would see no benefit.

“If you lose job-based coverage, you can sign up. But not if you just lose a job. Someone from the gig economy, if they have no health insurance right now, it does not allow them to enroll in the marketplace in federally managed states,” she added.

Looking to the Great Recession
More people would likely get coverage through Medicaid, though again, this depends on the state. During the Great Recession, when unemployment rates rose sharply to 10%, the U.S. saw major enrollment increases in Medicaid. In turn, states received increased Medicaid matching rates to help cover the cost. Congress has already increased Federal Medical Assistance Percentage (FMAP) to states by 6% since the pandemic started, and there may be another push to increase it to 12%, Guyer said.

“It does look like the economic impact of this could be worse and more sustained. The Great Recession is a good reference point in understanding things,” she said. “(States) are not going to be able to tax their way into covering these costs and they can’t borrow.”

Executives with Anthem are also looking back to the Great Recession as they try to determine what the future will hold. In 2008, commercial and individual customers made up nearly 75% of its membership compared to less than 30% today. Since then, the company has expanded its government footprint, operating Medicaid plans in 23 states and Washington D.C. It also offers plans on the individual exchanges in 14 states.

“We do expect that we will see, because of the potential high unemployment, some impact on our commercial enrollment. The early stages have been muted because of what’s happening with furloughs,” Anthem CEO Gail Boudreaux said in an earnings call. “We have a much more diversified business than we historically had.”

Boudreaux said she expects to see about 40 to 50% of members that had lost their employer-based insurance to get coverage through Medicaid, and another 30% or so to go into the individual exchanges.

In general, large, national insurance carriers will be better positioned to withstand the crisis, said Joel Ario, a managing director with Manatt Health. For example, companies like UnitedHealth Group, which have a mixture of employer-based and government plans, will be able to recapture members.

“They are across all of these markets so when people move from one market to the other, they tend to have the same members,” Ario said.

Smaller regional or local carriers, especially if they’re in an area that has been harder hit, will have a tougher time. Companies like Centene and Molina Healthcare, which have a big presence in the individual marketplaces and Medicaid plans, are expecting an uptick in members. In an earnings call, Centene CFO Jeffrey Schwaneke said the company had already seen some early membership growth in April, particularly in states that had open special enrollment periods for marketplace plans.

More insurers may look to bolster their presence in the ACA marketplaces in the coming years. UnitedHealthcare CEO Dirk McMahon said the company had already begun to look at participating in more exchanges prior to the pandemic, which it had largely exited in recent years.

“We’re still in the process of going through market by market, evaluating the relative efficiency of our network, our ability to compete, and states where we would like to extend Medicaid,” he said.

Payers are also pushing to make it easier for the newly unemployed to stay on their old plan. It’s an option that many patients would like — and is also more profitable.

Humana CFO Brian Kane said the company expected to see Medicaid membership grow, offset by reductions in large group plans and terminations of some small group plans. He expects small businesses “will disproportionately be impacted by the pandemic.”

To help them, Humana is proactively identifying companies that might be at-risk and helping them find more affordable coverage options.

A survey by LIMRA said carriers are also tweaking their benefit eligibility policies to extend coverage for employees that might have been affected by the pandemic. Of the surveyed carriers, 42% said they would continue coverage for all employees for a specific period of time, and another 22% said they would extend eligibility on a case-by-case basis.

Insurance groups are also lobbying for COBRA subsidies, which would help offset the cost for laid off employees to stay on their old health plan. Without their old company helping cover the cost, premium payments through COBRA can be staggering. The House of Representatives is currently weighing this strategy as part of its next Covid-19 relief package.

In the meantime, most insurers have kept their profit forecasts for the end of the year.