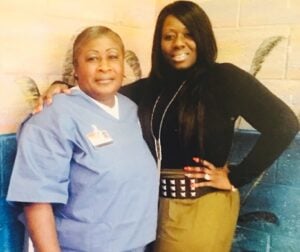 Florida’s prisons are so overfilled and understaffed that the system is in danger of imploding. State leaders know it. Republican State Sen. Jeff Brandes has called Florida’s prisons “a ticking time bomb.” Democratic Rep. Dianne Hart said, ”This massive overcrowding is a direct result of our outdated sentencing policies that we continue to apply to this present day.”

Florida lawmakers responded in the recently concluded legislative session by introducing dozens of bills to address the problem –- and passing none of them. Apparently, the legislature could find no inefficiencies, nothing to improve, in a system that has incarcerated people like Cynthia Powell, a 57-year-old grandmother and first-time offender, for 17 years.

Cynthia, a single mother who doted on her family, was on disability because of uncontrollable diabetes. Over the years, as her illness worsened and she endured severe pain in her legs, she began taking the prescription medication Lorcet, which contains hydrocodone.

In the spring of 2002, an acquaintance called her, saying that she had the flu and had heard Cynthia had a Lorcet prescription. She wondered if Cynthia could sell her some pills. Cynthia refused, but the person kept calling. Finally, when money was especially tight, she gave in.

Cynthia agreed to meet the woman at a Starbucks parking lot in Sunrise, Florida. There, in a rundown green van, Cynthia sold 35 hydrocodone tablets for a whopping $300.

As it turned out, Cynthia’s acquaintance was working as a confidential informant for the police. Worse, thanks to Florida’s draconian mandatory minimum sentencing laws, Cynthia’s relatively minor drug sale made her indistinguishable from El Chapo.

For selling 35 tablets -– weighing 29.3 grams, the same weight as a slice of bread -– Cynthia was convicted and sentenced to a mandatory 25 years in state prison.

Cynthia’s sentence was extreme, but it was not unique. There are thousands of Floridians serving excessive prison sentences. These lengthy terms not only destroy the lives of the individuals serving them (and their families), but they divert limited public safety funding from interventions that would actually make communities safer.

Cynthia has now served 17 years in prison. No sentient being believes society will benefit from her serving another day. Even the legislature recognized that some drug laws were producing absurd sentences and passed modest reform in 2014. If Cynthia were convicted today of the same offense, she would be sentenced to seven years. (The fact that seven years seems reasonable shows how the drug war’s punishment inflation has warped our thinking.)

Here are three easy steps Florida could take tomorrow if it wanted to safely reduce its prison population.

First, the legislature should apply any and all recent sentencing reforms, like the 2014 drug law reform, retroactively. I don’t think most people realize that when Congress or state legislatures pass reforms, they almost never make those reforms retroactive. It’s absurd. Typically, lawmakers hear stories like Cynthia’s and are moved to adjust the law, but then they don’t extend the relief to the people who moved them in the first place. That needs to change.

Second, lawmakers should realize that neither they nor state judges are omniscient. When legislators establish a minimum penalty and when judges impose a sentence, no one knows for sure how the defendant might grow or change while incarcerated. The federal judge who sentenced bank robber Shon Hopwood said that Hopwood would never amount to anything. Today, Hopwood is a Georgetown law professor and the judge freely admits he was wrong. Good for him, but we need to bake that humility into the system. Florida needs to give judges and prosecutors a mechanism to review sentences after a person has been in prison for a time.

Florida should adopt a “second-look law” that would allow people an opportunity to be resentenced after a period of time — say, 15 years — if they can demonstrate that they have been rehabilitated. To his credit, Sen. Brandes introduced a second-look proposal this year aimed at youthful offenders, but the legislature did not act on it.

Finally, Florida Gov. Ron DeSantis should use his executive clemency authority to fix some of the extreme and outdated sentences handed down over the past two decades. The state’s mandatory minimum sentencing laws have generated plenty of deserving clemency recipients, perhaps none more so than Cynthia Powell. She should be sent home to her family tomorrow.

Florida leaders have done a fine job of identifying problems in the state’s prison system. Now they need to find the will to solve them.

Kevin Ring is a former Capitol Hill staffer, Biglaw partner, and federal lobbyist. He is currently the president of FAMM, a nonprofit, nonpartisan criminal justice reform advocacy group. Back when ATL still had comments, “FREE KEVIN RING” was briefly a meme. You can follow him on Twitter @KevinARing.