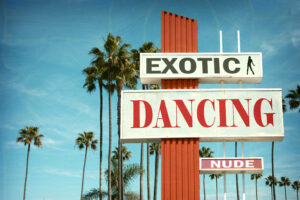 If you learned anything in professional responsibility class, it was to never, ever mix client funds with personal funds. It’s the most basic of ethical responsibilities for a lawyer. But just because it is fundamental, that doesn’t mean everyone’s going to follow these very basic rules.

Florida attorney Brett Hartley has been disbarred by the Florida Supreme Court. The court found he had used his attorney trust account — which included client funds — for personal expenses. What really trips this story into Florida Man levels is that the money from the trust account was used to run a strip club, Flash Dancers, in Jacksonville.

According to reporting by the Daytona Beach News-Journal, Hartley said he used the attorney trust account to run Flash Dancers because he couldn’t find a bank willing to open up an account for a strip club. Yes, that’s right, Hartley says that in Florida of all places, he was unable to find a bank willing to take a strip club’s money. And I suppose the bajillion other strip clubs in the state are rocking a piggy bank and a prayer for all their financial needs.

Hartley was suspended from the practice of law in 2018, during the investigation into his behavior. But according to the Florida Supreme Court, despite those serious consequences, Hartley still did not participate in the investigation which ultimately led to his disbarment.

The Supreme Court’s ruling to disbar Hartley came after he failed to provide documents and financial records to investigators from the Florida Bar and only sporadically participated in the inquiry, according to records.

The Florida Bar tried to accommodate Hartley during the investigation due to his “efforts at substance abuse rehabilitation” and because he lived out of the area in Colorado, documents state.

The Florida Supreme Court also found Hartley made false statements to a county judge regarding the payment of restitution to a client.