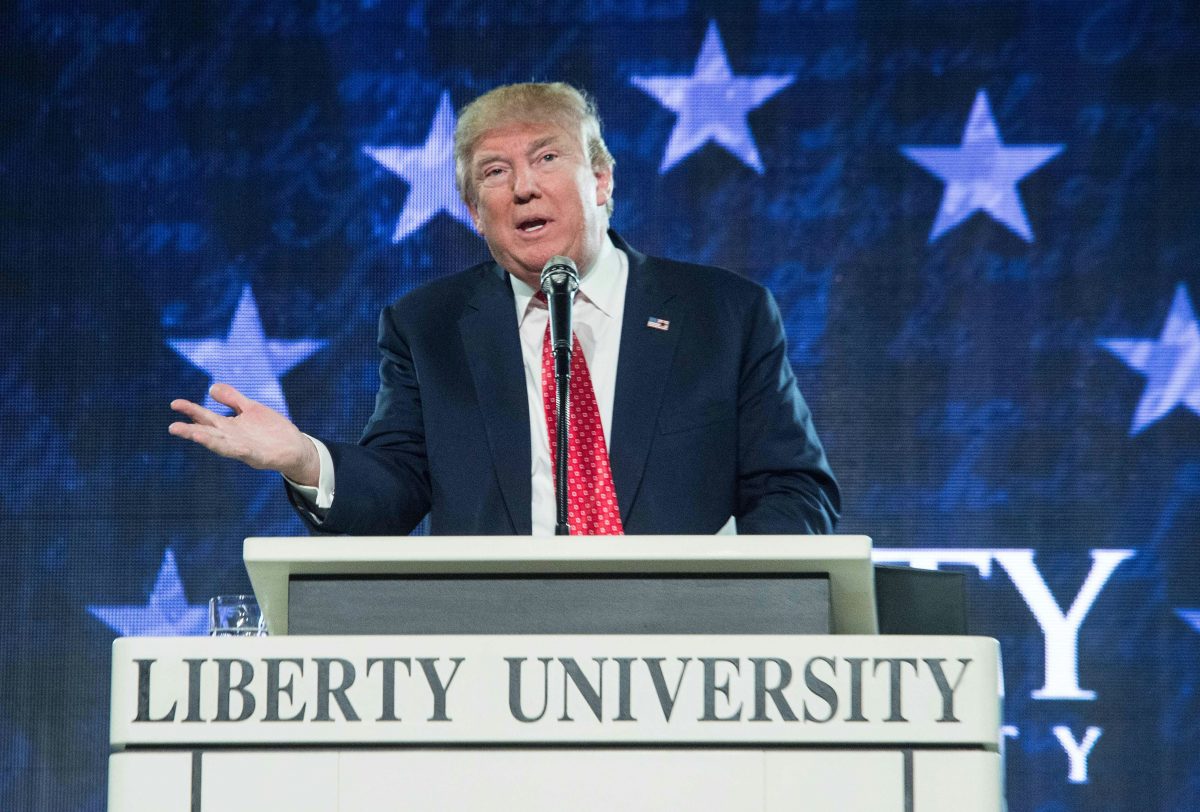 Remember last month when Jerry Falwell, Jr. was all over Fox insisting that he was going to bring students back to Liberty for in-person classes during a pandemic?

I don’t want to become one of these college presidents who are pushing this problem off on someone else by sending 20 year olds with near zero mortality risk to sit at home for the rest of the semester, often with grandparents in the house who truly are at risk. (2/4)

Turns out … not so much. Apparently Falwell invited the student body to return from spring break (with their germs!) on March 20 for a “modified” schedule of on-campus learning. And by “modified,” he meant they were welcome to sit in their dorm rooms and use the WiFi to “attend” class, which transitioned to an all-online format on March 23.

Liberty purported to continue offering residential and to-go meal services, although it sent multiple conflicting emails to students both “encouraging you to stay home” while simultaneously not endorsing “any particular action” with respect to campus housing. So if students wanted to hunker down in Lynchburg and Zoom from their dorm rooms while subsisting on takeout from the dining hall, they were theoretically free to do it.

In reality, the only way Liberty could colorably maintain student safety was if the vast majority of enrollees stayed home with their families, effectively subsidizing the handful of students who took the school up on its “offer” to socially distance in the abandoned dorms. Which is exactly what happened, of course.

But Jerry Falwell is a generous man, so he decided to make it right with the kids. If they declared their intention not to return to the dorms by March 28, he would offer them a $1,000 housing credit toward next year’s fees for any student who chooses to return. Heck, graduating seniors could even take the $1,000 off their bills for spring. Sound good?

Well, apparently NOT. Which is why his school just got hit with a class action lawsuit filed by students who claim the school ripped them off for tuition and fees. Because the $1,000 housing credit did nothing to offset the meal plan, health insurance, student activity fees for shuttered gyms and libraries, parking charges, or various course fees associated with its Divinity, Osteopathic Medicine and (ABA accredited) Law Schools.

The case, captioned Student A v. Liberty University, Inc. was filed anonymously in the U.S. District Court for Western District of Virginia by a student who claims a colorable fear of retaliation should their identity be revealed.

Plaintiff is concerned about negative treatment from the University that could come in the form of negative treatment in the classroom or possibly even expulsion. Liberty’s President, Mr. Falwell, has already shown his willingness to use social media, for which he has a large following, to criticize and invite scorn upon anyone who criticizes him, Liberty, or Liberty’s actions regarding the COVID-19 pandemic. Liberty’s Senior Vice President of Communications contacted one student, and involved that student’s employer, who spoke out against the University and, in the student’s words, “chided” him for his comments. Liberty has further shown its willingness to retaliate against anyone who criticizes Liberty’s COVID-19 response by seeking and obtaining arrest warrants against members of the media who participated in stories critical of Liberty.

Nope, then they’ll go off to summer jobs or internships dummy

The suit claims breach of contract, unjust enrichment, and conversion, accusing the school of pretextually keeping the dorms “open” as flimsy cover to pocket students’ meal and residential fees.

Liberty University is, in a very real sense, profiting from the COVID-19 pandemic, keeping its campus and campus services “open” as a pretext to retain Plaintiffs and the other Class members’ room, board, and campus fees, despite no longer having to incur the full cost of providing those services, all the while putting students’ finances and health at risk.

It also alleges that the school may be eligible for up to $15 million in stimulus funds, and is thus double dipping to profit off the pandemic. Which is a scurrilous allegation to level at a pious moral beacon who threatens expulsion for students caught drinking alcohol and then falsely accused a photographer of doctoring multiple images that showed him drinking in a crowded nightclub!