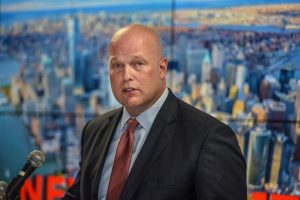 When the history of the Trump administration is written there are going to be so many open sewers to talk about that the cavalier denigration of the Justice Department isn’t going to get nearly the attention it deserves.

It began with the administration installing an elf who was declared too racist to hold a federal judgeship by REPUBLICAN Senators in the 80s.[1] Now it’s settled on the reanimated corpse of Bill Barr out there performing the important work of getting religious people needlessly killed.

But in between these two stood Matthew Whitaker. You remember Whitaker, right? He was the bumbling hack who tried to get a judgeship based on his football accomplishments and ended up heading the Justice Department in his one tie for three and a half months. We had some good times during his dumpster fire of tenure culminating with his wife’s zany defense of his failures. That Sessions and Barr will go down eclipsing this interregnum of futility is a damn shame. Everyone should remember just how wild it was that Trump tried to keep the Justice Department run in perpetuity by a chump best known for enabling what turned out to be a scheme that the FTC had to shut down.

We’re happy to report that Matthew Whitaker is back folks, and he’s got a new book that will send hearts aflutter among the MAGA crowd titled, Above the Law: The Inside Story of How the Justice Department Tried to Subvert President Trump (affiliate link).

Yes, Whitaker has named his new book after us, which is a bold gesture since the search for “Matthew Whitaker” and “Above the Law” brings up such a cavalcade of great memories that Whitaker himself can’t possibly want associated with his collection of crayon-scribbled conspiracy theories. And let’s just check in on some of those theories:

Whitaker was an outsider with a desire to see justice done and democracy work. In his straightforward new book, Above the Law, he provides a stunning account of what he found in the swamp that is Washington. Whitaker reveals:

• How the Deep State—drawing on elite universities and corporate law firms—perpetuates itself, keeping a small clique of people in power to ensure that nothing ever changes

If you had any doubts that the Deep State actually exists, that it perpetuates a government of insiders, and that it inexorably pursues a political agenda of its own, then you will find Whitaker’s first-person account eye-opening and utterly convincing.

The former head of the Department of Justice is using the “Deep State” as a proper noun to describe the vague idea that prosecutors are politically independent. In a world where this guy was bookended by a 20-year Senator and a retread from the George H.W. Bush administration he’s claiming that the problem is that there’s a “small clique of people in power.” Yeah, we know. And look, it’s not that the fixation with credentialism isn’t damaging American government, it’s that it’s not doing so by installing a shadow government, but by ensuring that neither “side” of the political aisle disagrees on drone policy. If there’s a “Deep State” it doesn’t pull the strings, it just smooths the path for a revolving door of cheap suits like Whitaker to fulfill their political whims unchecked.

Imagine presiding over a Justice Department ramming unrepresented children through deportation hearings and arguing that immigrants don’t need sleep or basic hygiene and hamstringing an investigation into obstruction of justice and turning affirmative action on its head and still claiming to be completely powerless to some invisible cabal that “inexorably pursues a political agenda of its own.” Unfortunately there are always yokels out there willing to buy the disrespect card.

And I’m looking forward to all these people running across our stories when they try to Google where they can buy this book.

Earlier: Matthew Whitaker Applied To Be A Judge With A Ridiculous Collection Of Nonsense And Football
Point By Point Analysis Of Matthew Whitaker’s Wife’s Zany, Rambling Email Defending Her Husband
Matthew Whitaker Apparently Only Owns One Tie
Revisiting World Patent Marketing: The Multimillion-Dollar Scam Matt Whitaker Was Neck Deep In

[1] Technically it began with the firing of Sally Yates in a huff, probably creating a bunch of illegal warrants that we all agreed to just pretend weren’t happening. Yates was replaced by Dana Boente who wasn’t one of the officials given FISA warrant power under the statute — all of whom are subject to Senate confirmation for this fact. The statute does grant those powers to the “Acting Attorney General” but that language was explicitly only added to the law to resolve the loophole that someone could have FISA powers as Deputy Attorney General and be stripped of them if promoted to Acting Attorney General — the only means of promotion contemplated by lawmakers drafting the bill because the DOJ is supposed to follow a line of succession that would mean the Acting AG would always be, unsurprisingly, one of the people listed in the statute. Notably, the statute’s whole point was to prevent sweeping powers from being granted to a flunky via a Nixonian Saturday Night Massacre, but folks just ignored all that and said, “derp, it says Acting Attorney General right there!” It’s a marquee example of how dogmatic textualism can justify the exact opposite of a law’s intent.