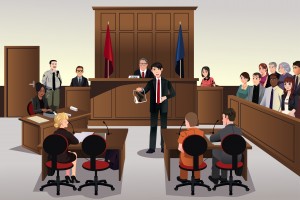 A few years ago, I was trying a private racketeering case to a federal jury (and I think that our firm still may be the only private law firm to obtain a plaintiff’s verdict on a RICO claim in decades). The trial went on for something like three weeks, and we had to present well over a thousand exhibits. Thankfully, one of our firm’s excellent analysts and I had a procedure where she would put up this or that exhibit fairly smoothly. I would be examining a witness when I’d say, “Can I ask Ms. X to put up Exhibit 23?” and she would immediately have it up for the judge, witness, and jury. We worked out the general flow and order before, and I would know when to pause so it went smoothly (the way juries expect after seeing so many movies about trials).

It didn’t go so smoothly for my adversary.

The several trial lawyers on the other side, one in particular, were good. But they were a bit old school. They used the overhead projector (Elmo) that most courts have, and it went fine enough (though there was some delay as papers fell or got out of order). However, at one point my adversary — a charming guy — was at the projector and had forgotten an exhibit he wanted to ask questions about. The exhibit was already in evidence. Realizing he didn’t have the document he said, with a smile, “You know, this is something I’ve been wanting to say for days. Can I ask Ms. X to put up Exhibit 23?” Before my colleague could even prepare the exhibit, the judge — who is out of central casting for what a judge should look and sound like — boomed, “No way. You have your own exhibits. Use them.” The charming adversary was soon joined by one of his colleagues, but between the two of them they couldn’t find the exhibit. And the judge continued to criticize them for wasting the jury’s time. It was not a good look, to put it mildly.

As noted, we won that RICO trial. Did we win because we were incredibly organized, and our adversaries weren’t? No and yes. I don’t think it was just our organization. But if we weren’t as organized, I frankly could not see how we would have won. We kept a dozen jurors sufficiently engaged for the better part of a month so that they could fairly render a verdict (they deliberated for a few days, poring over testimony and exhibits). As plaintiffs with the burden, and, as we know at our firm, in a terribly complex dispute like that one, where we have to present several years worth of evidence, and testimony from a gaggle of witnesses, you must be organized. Or you die.

But beyond adding this to the list of things that they don’t teach you in law school about how to be a litigator, the point is that this fairly boring, unglamorous organizational and administrative work is essential to being a successful trial lawyer and winning for your clients. It need not be as dramatic as this example. You need your admin ducks in a row as well with document and data management, with communication organization, sharing of information, recording hours, tracking expenses, ensuring you have the printer, e-discovery staff, or hotels when you have an evidentiary hearing — the list goes on. And none of it sounds all that lawyerly but handling it well is key to a lawyer’s success.

When you read To Kill a Mockingbird, you might have been inspired or enthralled. You likely didn’t think of how Atticus Finch organized the exhibits he would use for cross examination. But Finch did, and you need to pay attention to those kinds of administrative details if you want to win for clients. John Balestriere is an entrepreneurial trial lawyer who founded his firm after working as a prosecutor and litigator at a small firm. He is a partner at trial and investigations law firm Balestriere Fariello in New York, where he and his colleagues represent domestic and international clients in litigation, arbitration, appeals, and investigations. You can reach him by email at john.g.balestriere@balestrierefariello.com.