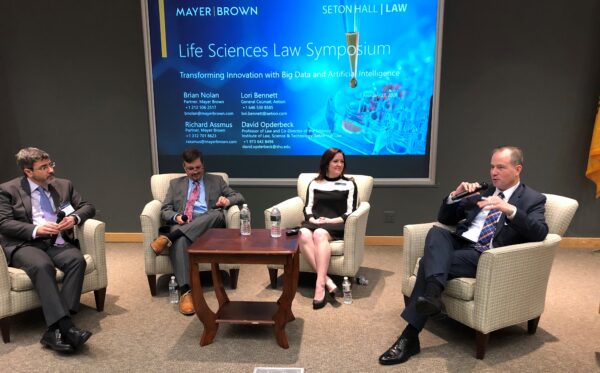 As more companies use artificial intelligence and machine learning in the process of drug discovery and development, that raises a big question: Who owns the intellectual property?

“It’s almost like there’s something new going on here that current IP law is not well-suited to protect,” said panelist Richard Assmus, a partner at Mayer Brown’s Chicago office.

Use of AI/ML in drug discovery and development has fed the growth of a number companies and drawn interest from large pharmaceutical and biotech firms as well. One such firm is Salt Lake City-based Recursion Pharmaceuticals, which already has a drug discovered through machine learning, REC-994, in Phase I development. Another company, Oxford, U.K.-based Exscientia, has formed partnerships with multiple drugmakers like GlaxoSmithKline, Bayer, Sanofi and Sumitomo Dainippon Pharma, to discover drugs using AI. On Jan. 30, Exscientia and Sumitomo Dainippon announced that their first drug candidate created using AI, DSP-1181 for obsessive-compulsive disorder, had entered the clinic.

Significant advancements have also taken place in academia. Nolan brought up the Feb. 20 announcement by the Massachusetts Institute of Technology that its researchers had used a machine learning algorithm to identify halicin, a new antibiotic compound with in vitro and in vivo efficacy against antibiotic-resistant bacteria. Halicin, previously investigated as a potential treatment for diabetes, was identified using an algorithm capable of combing through 100 million chemical compounds in days to pick out potential antibiotics using mechanisms of action different from those of existing drugs. The name halicin came from HAL-9000, the malevolent AI in “2001: A Space Odyssey.”

But Assmus said MIT’s work is an example of where legal language has not kept up with technological development. “Was that a derivative work of that data? Was it an improvement of those compounds?” he asked.

In other words, if an AI discovers that an existing diabetes drug works as an antibiotic, the question is who discovered it, whether that’s the human programmers who built the algorithm or someone else.

“I feel like we need new language to talk about what’s going on here,” Assmus said.