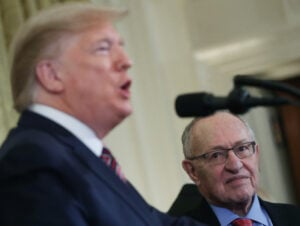 It was inevitable we’d wind up here. After months of protesting that there was no quid pro quo! and no firsthand witnesses! and no problem asking a foreign government to investigate corruption!, we have reached our final destination. Republicans are now openly insisting that the president has every right to ask a foreign government to intervene on his behalf, as long as he earnestly believes it’s in America’s best interest that he win reelection.

It was not inevitable, however, that Harvard Law Professor Alan Dershowitz throw his personal legacy on the pyre in service of this inane argument. But he did it anyway, for one last moment in the spotlight.

In response to Texas Senator Ted Cruz’s question — “As a matter of law, does it matter if there was a quid pro quo? Is it true that quid pro quos are often used in foreign policy?” — Dershowitz launched into a rabid defense of unchecked presidential power.

If a president does something which he believes will help him get elected in the public interest, that cannot be the kind of quid pro quo that results in impeachment. I quoted President Lincoln, when President Lincoln told General Sherman to let the troops go to Indiana so that they can vote for the Republican party — let’s assume the president was running at that point, and it was in his electoral interest to have these soldiers put at risk the lives of many many other soldiers who would be left without their company, would that be an unlawful quid pro quo? No! Because the president (A) believed it was in the national interest, but (B) he believed that his own election was essential to victory in the Civil War.

Because preserving the Union in wartime is exactly the same as pressuring a dependent foreign nation to gin up a fake scandal about an electoral opponent and announce it publicly.

This morning, the esteemed professor is angrily ranting at the media for “[t]aking advantage of the fact most of their viewers didn’t actually hear the senate Q and A,” saying, “They characterized my argument as if I had said that if a president believes that his reelection was in the national interest, he can do anything. I said nothing like that, as anyone who actually heard what I said can attest.”

Who ya gonna believe, Dersh or your own lyin’ eyes?

“I want to be elected. I think I’m a great president. I think I’m the greatest president there ever was and if I’m not elected the national interest will suffer greatly” — Dershowitz’s impassioned defense of Trump got a little weird at the end pic.twitter.com/sLZheG5r91

Arguing that naked solicitation of bribery or violation of law is the only case in which an impeachment doesn’t require senators to “psychoanalyze a president,” Dershowitz insisted that any effort to determine motives is “dangerous.” Which is a pretty strange position for a guy who spent 45 years explaining the concept of mens rea at the most prestigious university in the country. He went on:

But a complex middle case is: ‘I want to be elected. I think I’m a great president. I think I’m the greatest president there ever was. And if I’m not elected, the national interest will suffer greatly. That cannot be an impeachable offense.

And then he was mercifully gonged off by the Chief Justice before he could expound further on the unitary executive’s exclusive right to determine what’s best for America. But the internet never forgets!

Many commentators today are quoting a passage from Dershowitz’s 2018 book, “The Case Against Impeaching Trump.”

Assume Putin decides to “retake” Alaska, the way he “retook” Crimea. Assume further that a president allows him to do it, because he believed that Russia has a legitimate claim to “its” original territory. That would be terrible, but would it be impeachable? Not under the text of the Constitution.

Incidentally, when the book came out, Dershowitz indignantly insisted that he was not defending Donald Trump’s conduct, he was defending civil liberties, and anyone who said otherwise was a damn, dirty liar.

You are implying in a kind of Mccarthyite way that I am somehow defending Trump and that I am making his case. Shame on you. I am making a civil liberties case. I am not part of the Trump defense team and don’t you dare accuse me of doing that. I am not making a case for anybody.

My how times do change!