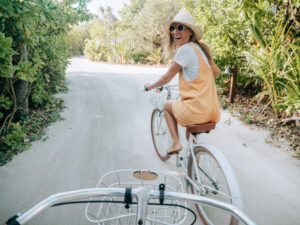 Some good news just hit for the lawyers in Denver who commute to work on their Cannondales! Or their 30-year-old beach cruiser they bought off some guy who was also selling homegrown shrooms at a yard sale. I feel like both of those things are proper Denver behavior.

Gov. Jared Polis signed a bill into law on Wednesday that allows bicyclists to get out of intersections faster by treating them as safety stops.

Finding out that this law was passed made me happy for two reasons. The first is that less time spent in intersections hopefully means that more people get home safely — intersections are a hot spot for accidents. The second is that I now have a new way of classifying my hot ride. Most of us are familiar with the age old how-to-think-like-a-lawyer hypothetical of asking if a vehicle ban in a park excludes bicycles. The scenario is a good way of getting people to try their hand at analogical reasoning — is an 18-wheeler really the same type of thing as a Huffy? Surely a motorcycle would be a vehicle for the purposes of the park ban on account of its speed and noise, as would a car, but would it make sense to ban a bike along those lines? Now we can cut straight through the Borromean and argue “low-speed conveyances” are an exception to the vehicle rule! That might not be true, but it would at least help you think like a lawyer by asking if redefining a thing lets you do what you want!

New State Law Lets Bicycles, Scooters Roll Through Stop Signs When They Have The Right-Of-Way [9 News]