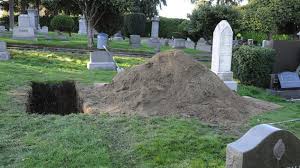 Living, as we do, in a world in which fake currencies possess some real (if often declining) value in terms of actual currencies, but which still remain ineffable in the sense that, being immaterial, they cannot be seized or found if the person “holding” them does not want them to be, the story of Gerald Cotten was probably inevitable. Cotten created the cryptocurrency exchange QuadrigaCX, built up a user base of 115,000 with $140 million in crypto between then, then (allegedly) transferred a bunch of “funds” to himself and others, created all sorts of aliases on Quadriga to trade, and then up and died in India a year ago, either of a heart attack or Crohn’s disease, depending on who you ask, taking the passwords to all of his digital wallets (and all of his customers’ fake money) with him to his grave, to which we now turn.

The story goes that the very real corpse of Cotten was returned to Canada after his death and buried. Given all of the missing money and the conveniently inaccessible wallets, Cotten’s client/victims want to be sure.

On Friday, the legal team representing users of the platform in the bankruptcy proceedings sent a letter to the Royal Canadian Mounted Police seeking an exhumation and post-mortem autopsy be performed on Cotten’s body “to confirm both its identity and the cause of death”…. They say information revealed during the proceedings “further highlight the need for certainty around the question of whether Mr Cotten is in fact deceased”…. Jennifer Robertson said her late husband’s death “should not be in doubt”, adding it is unclear how its confirmation “would assist the asset recovery process further”.

Well, we can see how that death might be in doubt and its disconfirmation might help locate the “money,” but either way, it’s not surprising for the losers in the Quadriga scheme just want to find the baseline in physical reality that the rest of it deprives them of.