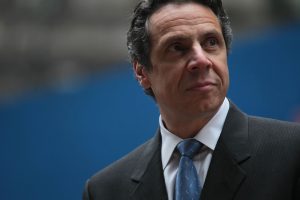 This isn’t particularly fashionable to say right now, but the love affair reasonable America is having with New York Governor Andrew Cuomo — to the point where people have to actually consider whether or not he’s going to turn up and unseat Biden at the convention — is deeply unsettling. Look, it’s not that he’s wrong to worry about the public health crisis unfolding in his state. After all, that’s actually his job! It’s what’s fueling his meteoric rise in the public’s esteem. Because it feels like folks are way more enamored of the idea of him than any steps he’s actually taking.

The common thread in all the Cuomo love is an appreciation for “big” and “bold” steps. This appreciation is usually couched in contradistinction to either Donald Trump’s bumbling efforts or Mayor Bill de Blasio’s cautious attempts to contain the disease without, you know, collapsing his city. The uneasiness of the political moment is not with any specific policy coming out of Albany, but the uncritical sense of relief people seem to feel the “bigger” and “bolder” the step. It’s a feeling Cuomo tacitly embraces with every television hit: “Look at me, they said close schools, so I closed your bodega! They said 6 feet, so I made it work from home! Screw you Chris, mom likes me better!” At what point are people responding to policies as opposed to the idea of policies that sate their desire to see something done to address a natural disaster? Because there are good ideas and bad ideas and right now I’m not convinced a random sample of Brooklyn craft-beer sippers feel much compunction to sort out the difference so long as Cuomo said it and de Blasio didn’t.

That may not seem like a big deal, but how America resolves this tension is pretty important. We’ve already got isolation orders around the country that are probably not constitutional and there are a lot of other, much more troubling policies out there that are easily pitchable as possible solutions to this disease. What’s off-putting is that an action-addicted America might be ready to embrace anyone pitching them without a second thought.

The extent of this mood is the subject of a piece in The Atlantic yesterday from a number of professors titled, “Red and Blue America Agree That Now Is the Time to Violate the Constitution.” The work reflects a poll the data-centric academics took of a representative sample of 3,000 Americans to opine on eight different but almost certainly unconstitutional policy options: “including forced quarantine in a government facility, criminal penalties for spreading misinformation, bans against certain people entering the country, and conscription of health-care workers.” What they found was that Americans of all political stripes are pretty comfortable with the idea of an executive authority just imposing its will right now:

A majority of respondents supported all eight of these policies, most by considerable margins. The proposals with the lowest support were seizing businesses and banning all citizens and noncitizens outside the country from entering, but these policies still had 58 and 63 percent support, respectively. The proposals with the highest levels of support were banning noncitizens from entering the country (85 percent) and conscripting health-care professionals to work despite risks to their own health (78 percent). Both policies burden a defined minority of the population, so it’s not surprising that large majorities support them. But criminalizing speech based on its content, an idea antithetical to modern American constitutionalism, was also very popular: About 70 percent of respondents supported restricting people’s ability to say things that may qualify as misinformation. Likewise, 77 percent of respondents support suspending all religious services and gatherings, thereby restricting religious freedom. And even when we explicitly told half of our sample that the policies may violate the Constitution, the majority supported all eight of them—even the speech restrictions.

And despite the dismissive propagandizing from Fox News downplaying the crisis and asking grandparents to sacrifice themselves at Carousel to appease the economy, the study found that Republicans actually do recognize the extent of the crisis. They just want Trump to get off his ass and be the one willing to take “big,” “bold” steps to violate the Constitution himself. Truly, we have united the country!

Everything about the political landscape right now eerily mirrors the immediate aftermath of 9/11 when no invasion of liberty seemed too small. The primary distinction is the federal chief executive this time is too stupid to glean exactly how much of a blank check he could be cashing. Sure, this stimulus bill is an astounding Republican power grab, but pales in comparison to the Patriot Act and launching a war in a country that had nothing to do with the attacks. At some point, this guy is going to figure out that he can be “The Decider” and start figuring out how the disease spreads faster among people from Mexico or something and we’re all screwed.

As the professors conclude:

Often, efforts to roll back civil liberties face political opposition, but now bipartisan support for rights-restricting COVID-19 responses could smooth the path for constitutional erosion. James Madison predicted as much when he described constitutional rights as “parchment barriers,” easily transgressed when the majority is so inclined. And indeed, history presents numerous examples of liberty violations made in the face of security threats: the Alien and Sedition Acts signed into law by President John Adams, Japanese American internment camps during WWII, and the use of torture after 9/11. After the threat has subsided, Americans must recognize any constitutional violations for what they were, lest they become the new normal.

Look, this is serious, and sometimes dogged adherence to the Constitution offers an ill fit when confronted with advances in technology, or the many vectors of modern calamity, or the pretending the government isn’t an anachronistic reflection of a legalized slave economy. But there are broad strokes in that document that are at the very least symbolically useful and if we’re really going down the road of pushing these freedoms to the limit, it would be nice if we were willing to have a deliberative chat about it beforehand.

The very least we can do is be really queasy about the idea of lionizing someone for it.

Earlier: Texas Lt. Governor Will Death Panel Your Nana To Save The Economy