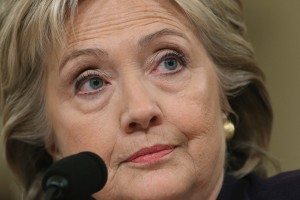 Welcome to Super Tuesday 2020, where the most important story is HILLARY CLINTON’S EMAILS! And not just any emails, mind you. These are the emails pertaining to the 2012 attack on the U.S. embassy in Benghazi. Because we live in hell.

The rabid conservatives at Judicial Watch — which was founded by none other than Larry Klayman, although they’re currently on a break — are going to get Hillary Clinton if it’s the last thing they do, dangit. And finally the big prize is almost within their grasp! Yesterday, U.S. District Judge Royce Lamberth ordered Secretary Clinton to submit to deposition in Judicial Watch’s FOIA suit against the Department of State over her buttery, buttery emails from eight years ago.

Soon they will find the smoking gun that proves Clinton ordered those marines to stand down and allow American patriots to be slaughtered in Libya, and then they can impeach her and lock her up forever! Or … they’ll just get the same stuff that Clinton already said under oath during 11 hours of televised testimony before Congress. Definitely one or the other.

Back in 2018, Judge Lamberth held that State had failed to adequately scour its own records for documents pertaining to the Benghazi attack, particularly those which might have been on Secretary Clinton’s private email server. So the case continues, with Judicial Watch now litigating for yet more information about the search for documents itself, and specifically why the responses to prior FOIA requests have been so desultory. Is it because known Deep Stater Bill Barr is still trying to protect Hillary Clinton?

Probably! Bill Barr’s Justice Department did just clear Hillary Clinton of wrongdoing with regard to her private email server, AGAIN. But luckily Judicial Watch is on the case, and so is Judge Lamberth, who has so many questions unanswered by Clinton’s “incomplete, unhelpful, or cursory at best” responses to written interrogatories in the case.

For example, how did [Secretary Clinton] arrive at her belief that her private server emails would be preserved by normal State Department processes for email retention? Who told her that—if anyone—and when? Did she realize State was giving ‘no records’ response to FOIA requests for her emails? If so, did she suspect that she had any obligation to disclose the existence of her private server to those at State handling the FOIA requests? When did she first learn that State’s records management employees were unaware of the existence of her private server? And why did she think that using a private server to conduct State Department business was permissible under the law in the first place?

No doubt the Secretary’s recollection of events eight or nine years ago will be refreshed by the presence of a video camera to record lots of footage to selectively edit for Judicial Watch’s next Twitter video. Similarly, the organization will scrupulously heed the judge’s admonition to “focus on whether she used a private server to evade FOIA and, as a corollary to that, what she understood about State’s records management obligations.” Just ask Judicial Watch’s president Tom Fitton:

HUGE: Federal Court Orders Deposition of Hillary Clinton on Emails and Benghazi Attack Docs — “The Court agrees with @JudicialWatch – it is time to hear directly from Secretary Clinton.” https://t.co/s9uBjeHxBZ