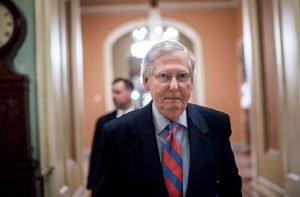 The State of Texas is planning to reopen businesses such as restaurants, theaters and malls as early as May 1. Restaurants in the State of Tennessee are already permitted to serve dine-in customers as of April 27. Meanwhile, many sports fans wait with anticipation for news surrounding when their favorite professional athletes will return to play.

Could a national effort to insulate employers from employee lawsuits related to contracting coronavirus speed up the return to play for many athletes?

Senate Majority Leader Mitch McConnell intends to bring the Senate back into session on May 4 and declared that a priority is to implement protections for employers who want to get back to work. McConnell’s plan is being referred to as a “liability shield” that not only protects employers against coronavirus-related lawsuits filed by employees, but also customers.

“Before we start sending additional money down to states and localities, I want to make sure we protect the people we’ve already sent assistance to who are going to be set up for an avalanche of lawsuits if we don’t act,” said McConnell, who added that the country will be afraid to open up if employers are concerned that they will be sued.

Whether team and league executives will admit it or not, they are absolutely concerned about the potential of said avalanche of lawsuits. It is undoubtedly playing a large role with regard to plans to resume play of sporting events in the United States.

The National Hockey League and National Basketball Association regular seasons were being played when COVID-19 concerns spread across the United States, causing each league to indefinitely suspend their operations. Major League Baseball was about to host its annual Spring Training in Florida and Arizona followed by the start of its regular season. Spring Training was scrapped and the start of the season delayed, with no clear date as to when executives will feel comfortable allowing players onto the field and fans in the seats.

A clear concern for sports leagues and teams surrounds the legal exposure they will invite by rushing to allow fans into stadiums and arenas without a proven COVID-19 cure and prior to the release of a coronavirus vaccine. The leagues and teams need to first feel confidence in allowing their employee athletes onto the fields, courts and ice before even considering having fans in attendance.

On April 27, the NBA sent out a memorandum highlighting that teams may soon be able to conduct limited, individual workouts in cities that are not subject to government restrictions. It is targeting a date of no earlier than May 8 as the commencement date for such a change in rules, and it would come with many restrictions including that no more than four players are permitted at a facility at any one time and that group activities like practices and scrimmages remain prohibited.

While no professional sports team will benefit from federal assistance connected to the Payroll Protection Program (the Los Angeles Lakers was the only franchise to apply and receive benefits, which are being returned), McConnell’s comments could be an important consideration for those in control of sports in the United States. If his “liability shield” is established, then it could speed up the return of sports to the joy of many.