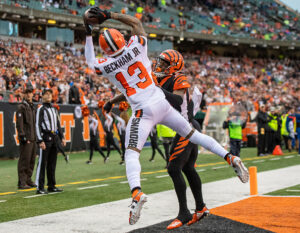 If you’re the sort of awful person that hates Odell Beckham Jr. for taking a boat trip, then we’ve got a story for you!

The Browns wideout was in New Orleans as his alma mater won the college national championship and as part of the locker room festivities he slapped a guy on the ass. For an adult with a fully formed sense of self this would fit right into the celebratory atmosphere. At worst, one might offer a “hey man, not cool” and move on. But the New Orleans police are not moving on because OBJ’s butt pat landed on a cop so they want the receiver arrested.

BREAKING: An arrest warrant has been issued for former LSU star Odell Beckham Jr., who was videoed hitting a police officer on the back side after the Tigers’ win over Clesmon. https://t.co/SpQLuKk9QC

OBJ with another one-handed grab.

Why have America’s police — the people who are supposed to have the mental and physical toughness to protect society — becoming the sonwflakiest snowflakes of all? They got a Starbucks manager fired for daring to make a joke which was ridiculous enough before another cop got caught lying about a copycat coffee cup. You have guns! Suck it up!

But in case you thought it was a black eye for New Orleans law enforcement that they even sought this battery warrant it’s so much worse:

Of course they tried to make this a gay thing. But, as everyone knows the law doesn’t sustain such a charge as long as the defendant yells, “no homo” at any point. It’s a little known provision of the Napoleonic Code they use down there.

Where were the prosecutors on this? Because the prosecutors are the professionals who are supposed to temper the “coulda from the shouldna” when it comes to wasting public money prosecuting technical violations that would make the city a laughing stock if ever brought.