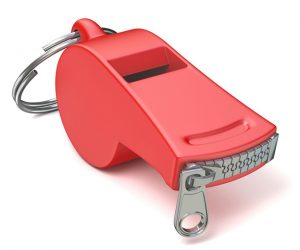 Last fall, Senators Chuck Grassley, Tammy Baldwin, Joni Ernst, and Dick Durbin introduced the Whistleblower Programs Improvement Act, which protects financial whistleblowers who report internally from retaliation. This law mirrors the Whistleblower Protection Reform Act of 2019 which passed in the House of Representatives last spring. It is similarly aimed at clarifying that the Dodd-Frank Act’s anti-retaliation provision applies equally to employees who report alleged misconduct directly to the SEC and to employees who only report alleged misconduct internally to their employers. In 2018, the United States Supreme Court ruled in Digital Realty Trust, Inc. v. Somers, 38 S.Ct. 767 (2018) that the plain language of Section 922 extends anti-retaliation protection to employees who report misconduct directly to the SEC.

Then, in late August 2019, the SEC announced a second award of $1.8 million to a whistleblower who provided  information and assistance “critically important” to success of an SEC enforcement action involving improprieties committed overseas. According to the SEC, the whistleblower provided “extensive and ongoing cooperation” during the course of its investigation, including reviewing documents and providing sworn testimony. At the same time, as reported the SEC, the whistleblower further continued to provide “additional and new information” that advanced the agency’s investigation. At the same time, the SEC specifically pointed out that, because the misconduct in this case occurred overseas, absent the whistleblower’s tip and assistance, the misconduct would have been difficult for the SEC to identify.

With these most recent awards, the SEC’s whistleblower program has awarded a total of approximately $387 million to 66 individual whistleblowers since beginning the program in 2012.

Of course, this is only one area of the changing law that affects practitioners who represent whistleblowers.  At Balestriere Fariello, we constantly monitor all statutory and case developments and bring a team of ivy-league educated and big-firm trained lawyers who apply decades of prosecutorial and litigation experience to assist whistleblowers bring claims and qui tam actions at the federal level.  Because of our diverse backgrounds and both extensive and diverse complaint drafting experience, we are able to move very rapidly, which is precisely what is essential to preserve a client’s position and maximize the benefit of our courageous and savvy clients who take a stand against individual and corporate malfeasance.  Our goal has always been to provide stellar representation while working tirelessly to advance the interests of those who take a stand and who want to safeguard their honest and law-abiding colleagues as well as all fellow citizens.

Daniel McGillycuddy has over 30 years of experience in handling complex, high-stakes criminal and civil matters. He is a partner at the trial and investigations law firm Balestriere Fariello in New York, where he and his colleagues represent domestic and international clients in litigation, arbitration, appeals, and investigations. You can reach Dan at daniel.m.mcgillycuddy@balestrierefariello.com.