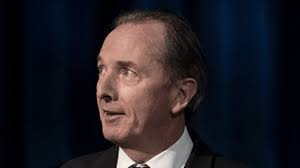 For nearly two decades, long before he was even at Morgan Stanley, let alone its CEO, James Gorman has coveted one thing above all else. And this thing, for some reason, was E*Trade. And it cannot be said that Gorman only loved the discount brokerage in the good times, and not only because there have not been a ton of good times for E*Trade over that period. He first fell for her in the aftermath of the dot-com collapse, and his hunger for her did not wane in spite of its huge pile of home-equity loans during the subprime mortgage crisis, although it did prevent him from buying her then.

Now, however, he’s the CEO, and is on a hot streak. So sure E*Trade just suffered the existential double-whammy of seeing its two biggest competitors announce plans to give their services away for free and then merge, but you guys: It’s E*Trade. And now you can’t stop Gorman from buying it, and at a huge premium to what it was worth before its biggest product became literally worthless.

“We’ll take on Schwab. We’ll take on Fidelity,” Mr. Gorman, now in his 10th year as CEO, said in an interview. “This isn’t about legacy-building; it’s about getting [Morgan Stanley] ready for prime time….”

Its crown jewel is a comparatively low-profile business: managing the stock that employees at hundreds of companies receive as part of their pay. Those shares are typically locked up for a few years and when they become available, E*Trade aims to move those employees into brokerage accounts.

You know, just like the company he bought last year. But there’s so much more to it in Gorman’s loving eyes.

Morgan Stanley expects to recoup that premium through $400 million of cost cuts and additional savings of $150 million from using E*Trade’s low-cost deposits to replace more expensive funding. Mr. Gorman said he also sees an opportunity to take E*Trade international, where his firm has no wealth-management presence.

And if you think, having finally ended his two-decade crusade, he’s going to be satisfied, well, if you’ve got an asset manager you want to sell, give him a call and be proven wrong.

Morgan Stanley has also been scouring takeover targets in asset management, where it is smaller and nichier than peers, people familiar with the matter have said.