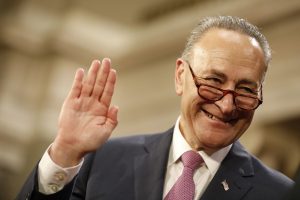 In a rally outside the Supreme Court yesterday during the abortion cases that didn’t actually go all that badly, Senator Chuck Schumer decided to channel his inner Donald Trump and launch some fiery invective toward the pair of justices giddily preparing to flip precedent and begin the work of dismantling Roe.

“Statements of this sort from the highest levels of government are not only inappropriate, they are dangerous.”

Trump himself joined the fray by tweet and Hannity interview — the belt and suspenders of gasbag faux outrage:

Buddy comedy duo Trump and Roberts got backup from even liberal legal observers who aired their concern that the Supreme Court isn’t being afforded the hushed, unquestioning respect befitting the mythology the profession has built around the body and calling for an apology.

Let’s be clear, this kind of language is wholly inappropriate and demeans the Supreme Court as an institution. It’s also Brett Kavanaugh’s exact language:

Since my nomination in July, there’s been a frenzy on the left to come up with something, anything, to block my confirmation. You sowed the wind and the country will reap the whirlwind.

Seems like maybe Kavanaugh’s already taken the Court to Whirlwind Town. Hey John Roberts, the inappropriate and dangerous call is coming from… inside your house!

For his part, Schumer quickly responded through a spokesperson:

So Schumer got Roberts to publicly mouth off to defend Justice Sir Keggerstein when he couldn’t be bothered to call out attacks on the women. Where was the concern over institutional assault when the White House was doing this? It’s almost as if the Supreme Court has no idea what an actual assault is anymore.

The only thing I’ll say for the complainers is that phrases like “pay the price” dial up rhetorical violence and shouldn’t be tossed around casually. It was obvious from context that Schumer was talking about paying a “political price,” but it’s a world of soundbytes and Schumer should be more mindful of that. It distracted from the ultimate point and just invited Fox News to shift off of the real point and pretend that this is a call to violence that, say, putting actual gunsights on elected officials or promising to cover legal fees for assaulting a reporter somehow isn’t.

But most troublingly, it seems a lot of otherwise level-headed people were less offended by the vaguely violent rhetoric than the idea that Schumer spoke of the justices as the nakedly political actors they are. That he cut through all the pomp and circumstance and pointed to two guys who plopped into their seats through a breakdown of governmental order — one through a seat held up by flagrant disregard of constitutional norms, the other forced through in a mockery of a vetting process while witnesses were just sitting there. Two guys who have demonstrated that legal precedent is a trifling inconvenience in their bid to implement a conservative political agenda as though they… were just Republican legislators in robes.

Making cracks in the mythology of the Supreme Court hurts some people. In a lot of ways, it hurts liberals most of all. If liberals are robbed of their faith that a heroic Warren Court is just around the corner it might actually require them to reach out to people outside of their Harvard and Yale alumni network to implement change. But it’s exactly that mythology that Republicans are trying to hack when they dress up ideologues in robes. They need liberals to keep pretending there’s an idyllic judiciary to give right-wing power grabs the sniff of legitimacy.

The courts are gone, folks. Or, more accurately, the courts are back. The courts historically act as a force for little-c conservatism and protecting the established order in the country. The Warren Court was a burr up the ass outlier in the steady trot of American history. Go ahead and join Chuck Schumer in calling it out for what it is and watching Roberts squirm.

The first step to fixing the mythology of the courts is going to be admitting there’s a problem.