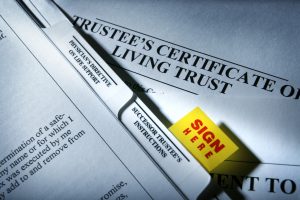 Upon death, one’s assets may be transferred to beneficiaries in a variety of ways. Assets such as life insurance policies, trusts, annuities, and retirement accounts commonly have a beneficiary designation. This means that, upon death, title transfers to the named beneficiary (or multiple beneficiaries). Generally, the named individual will present a death certificate to the financial institution and complete proprietary paperwork, prior to the monies being released or rolled over into another account.

Assets that are held jointly between individuals pass to the surviving owner upon the first owner’s death. This applies to financial accounts and real estate. Often this kind of joint ownership is seen between spouses or an elderly parent and adult child. The account or property may be titled in a number of ways, but often as “joint tenants with rights of survivorship.”

Questions as to beneficiary designations can arise after death. Often family members are surprised to find that they have been removed in place of someone else. Conversely beneficiaries are sometimes pleasantly surprised to find out that the beneficiary designation was never changed, despite the fact that there was a breakdown in the relationship between the account owner and the named beneficiary. Too often, no beneficiary is listed, and the last will and testament or state laws of intestacy determine who gets the asset. In this case, the beneficiary may not be in sync with what the owner intended.

When engaging in estate planning, it is imperative that one requests all beneficiary designation forms from their financial institutions to confirm who is the named beneficiary. Family structures change and relationships often fail. Assets that pass by beneficiary designation are supposed to make transfer of assets easy, as they avoid court. It is important to confirm that those listed are still a part of one’s life and are worthy of one’s hard earned estate.