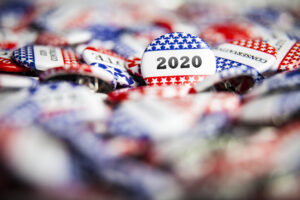 Not since Florida’s hanging chad debacle of 2000 has there been an electoral clusterf*ck like last night’s Democratic caucus in Iowa. It’s been a full 12 hours since they finished playing musical chairs down at the VFW Hall, and the Iowa Democratic Party (IDP) has released zero official results.

Maybe jamming all the voters in a phone booth and having them knock the crap out of each other is actually … a bad way to choose a presidential nominee?

Iowa is home to about 700,000 registered Democrats, who are invited to caucus at one of 1,678 precincts (or 99 satellite sites in places as far afield as Tbilisi, Georgia). Candidates must win the support of 15 percent of attendees to be considered viable, and the threshold is higher in smaller precincts.

But wait, there’s more! Each caucus precinct is awarded a predetermined number of state delegates based on Democratic turnout for the general elections in the 2016 presidential race and the 2018 Iowa gubernatorial election. That delegate allocation will not change no matter how many people show up to caucus. So if 18 people show up at one precinct, and 81 people show up at another, they can still wind up splitting the same number of delegates depending on historical turnout data from elections past.

Moreover, the division of delegates seems entirely arbitrary. How can Sanders, Buttigieg, and Warren all wind up with two delegates in this scenario?

That rounds out to two delegates each. pic.twitter.com/00QkeQ9nS1

Who could predict that such a logical and streamlined process would break down? And yet, it did.

Smarting from accusations the it had rigged the nominating process for Clinton in 2016, the DNC bent over backwards to make this caucus as transparent as possible. They planned to publicize the first and second round data, along with the final delegate tallies, and they whipped up a cool new app for precincts to report their results. Silicon Valley saves the day again!

Or, maybe not. The app crashed, and the IDP’s phone line was deluged with phone calls from 1,700 precinct captains desperately trying to hand in their homework. There are also multiple complaints of miscounts because precinct captains didn’t understand that the new rule locking in supporters after the first viability threshold meant that they could leave and still have their votes counted.

As of this morning, the Party was manually retrieving caucus results and inputting them into their system. IDP Chair Troy Price promises to release half the results at 4 p.m. this afternoon, a result which should please exactly no one.

Particularly not Joe Biden, who appears to have suffered a massive loss, failing to reach the 15 percent cutoff in multiple precincts. The last thing he needs is two news cycles reporting his Iowa collapse before the New Hampshire primary next Tuesday, so he’s demanding a full investigation before any results are released.

And if the DNC was hoping to avoid charges that the primary was rigged, it seems to have managed to do exactly the opposite.

What are the odds that:

➡️ most anticipated poll of the year (@DMRegister) is cancelled.

….and it has nothing to do with a Bernie blowout and a Biden crash?

And when they finally put out the dumpster fire, this flawlessly equitable process will yield 11,402 county delegates, who will be winnowed down to 41 representatives to the Democratic National Convention in July where they’ll join 3,938 other state delegates to determine who will be the Democratic nominee in November.

That’s right, all this rigamarole, from a state which will almost certainly vote for Donald Trump, is for a whopping ONE PERCENT stake in the Democratic nomination. Just as the Founders intended.