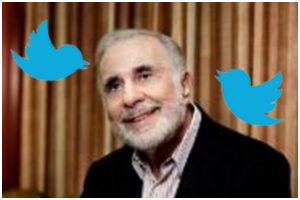 If anyone is enjoying the current coronavirus pandemic, it’s Carl Icahn. Sure, he may be a member of a vulnerable population in a state that has done practically nothing to prevent the virus’ spread, but he’s also a billionaire on a fortified island compound and just can’t help but smile when things get really, really ugly.

This is especially true when things getting really, really ugly give him some extra leverage in a really, really ugly fight he’s having. And oil’s worst week since Icahn was in his 50s has given him just that vis-à-vis Occidental Petroleum—leverage he’s not at all afraid to use in the middle of a global catastrophe, both against Occidental and to tweak his erstwhile archenemy in the midst of his Ackmanaissance, especially if it spares him quite a bit of work.

Andrew Langham and Nicholas Graziano, two lieutenants of the billionaire investor, would receive seats on Occidental’s board under the terms currently being discussed, people familiar with the matter said. Mr. Icahn and the company would also mutually agree on a third, independent director, who is likely to be Herbalife Nutrition Ltd. board member Margarita Paláu-Hernández, some of the people said.

As part of the deal, Mr. Icahn would also bless Occidental’s plan to bring back Stephen Chazen, its former chief executive, as chairman…. Occidental CEO Vicki Hollub, who has come under fire from Mr. Icahn, is expected to retain her position.

Peace is better than war, especially when it’s in the form of unconditional surrender.