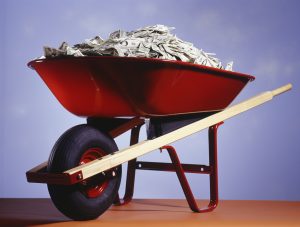 As engineering schools go, it is hard to think of more than a handful that can compete with the prestige of Caltech. Not only is the school one of the most difficult to get into — don’t even bother applying without near-perfect SAT scores, or math and science grades — it also has the most faculty citations of any university in the world. No surprise then, that Caltech can boast of over 70 Nobel Prize winners among its researchers, faculty, and alumni, while continuing to foster an environment of research for both faculty and the student body. That research has led to the university earning thousands of patents, with the school reporting that it receives more invention disclosures (descriptions of potentially patentable inventions submitted by an inventor or inventor group) per faculty member than any other domestic university.

Like an increasing number of other prestigious research universities, Caltech has not shied away from trying to increase its multibillion-dollar endowment via patent licensing and enforcement. At the apex of those efforts is the case filed in 2016 by Caltech against Apple and its WiFi-chip supplier Broadcom. Nearly 2,000 docket entries — and both IPRs and resultant CAFC appeals — later, a Los Angeles jury issued a huge verdict in Caltech’s favor of over $1 billion, based on Apple and Broadcom’s infringement of five claims from three Caltech patents. The verdict, reported as the sixth-largest of all time in a patent case, could have been worse for the defendants had the jury found their infringement willful. Despite that incremental victory in the midst of a rough defeat, the immediate reaction to the verdict, particularly from Broadcom investors, was not what the defendants had hoped for.

From a news cycle perspective, two main types of patent events really command immediate broad media attention. Billion-dollar verdicts, despite their rarity in patent disputes, definitely make the cut, no doubt due to the inarguably immense amount of money that appears destined to change hands as a result. To a lesser extent, Supreme Court patent decisions can also garner media attention, with the amount of discussion of any such decision in the mass media dependent on how arcane the issue of law involved is. Returning to billion-dollar verdicts, it is interesting to note that this is the second one earned by a major research university against multinational technology operating companies in just the past few years. (Carnegie Mellon achieved one against Marvell Semiconductor a few years back.) If that doesn’t wake up some other tech transfer offices, I don’t know what will.

At the same time, it is important to remember that getting to a billion-dollar verdict is not easy. Nor has a billion-dollar verdict ever been paid without being modified on appeal or the case settling according to at least one report. On the first point, just one look at the number of lawyers appearing on Caltech’s behalf from Quinn Emanuel proves how intensive these types of high-stakes patent cases are. And how important it is for the university to find a funding partner for the case — whether that be a megarich firm like QE willing to work on some kind of  contingency arrangement, or through third-party litigation funding. For patent owners, both options come at significant cost, albeit only if a successful result occurs. Verdicts like this one, however, should at a minimum serve to increase the appetite for funders and firms to get behind university enforcement campaigns.

As for whether this verdict will stand up on appeal, that is a much more involved question. One critical issue on appeal will be damages, with the jury awarding $1.40 per Apple device in royalties as part of getting to their huge verdict. In response, the defendants raise two significant arguments. The first one, which to me at least is more legally compelling, is that the jury awarding damages against both Apple and Broadcom is inconsistent with the hypothetical negotiation construct for patent cases and is incompatible with the idea of patent exhaustion. I can only imagine that the Federal Circuit will need to grapple with that question absent settlement. Second, the defendants argue that the $1.40 royalty rate is grossly inflated, considering the amount of technology in smartphones and other consumer electronic devices that contributes much more to the demand for those products than what Caltech’s patents teach. Instead, they argue that a $.01/product royalty is more appropriate, though Apple has had mixed results challenging jury verdicts on awarded royalty rates in the past few years.

As for settlement prospects, there is recent precedent from the Marvell case for a university earning a multihundred-million-dollar windfall based on a settlement following a billion-dollar verdict. But that case presented some unique issues around extraterritorial sales that are very different than the damages issues that Apple and Broadcom face against Caltech. Add in that Apple has historically never paid big (more than $25 million or so as far as I am aware) to settle a patent case filed against it by a nonpracticing entity — Qualcomm doesn’t count, since they are an Apple supplier too — and we are in uncharted territory here. On one hand, it seems like Apple could decide that paying off Caltech will not set a bad precedent for its dealings with other nonuniversity NPEs. On the other hand, why start paying big money until you absolutely need to? Should be fascinating to see how things develop.

Ultimately, verdicts like this give a boost to the entire patent ecosystem, if only because they remind everyone that certain patents can actually be considered very valuable, at least by a jury. Absent settlement, we know that the legal wrangling is likely to continue for some time, as with any contested verdict in a patent case. We will see how things turn out. For now, however, we can sit back and watch as Caltech celebrates its billion-dollar bonanza. For as long as it stands, at least.