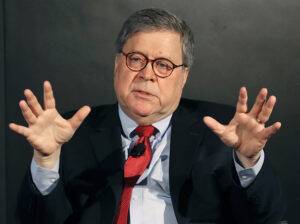 Never let a good crisis go to waste, right? While you were scrubbing your hands and pouring box wine on that panic attack, Bill Barr has been working overtime to clean all those pesky civil liberties out of America’s basement. Time to cart those dusty old habeus corpus protections to the dump!

In addition to statute of limitations and speedy trial modifications, Uncle Bill’s got another little trick up his sleeve.

The proposal would also grant those top judges broad authority to pause court proceedings during emergencies. It would apply to “any statutes or rules of procedure otherwise affecting pre-arrest, post-arrest, pre-trial, trial, and post-trial procedures in criminal and juvenile proceedings and all civil process and proceedings,” according to draft legislative language the department shared with Congress. In making the case for the change, the DOJ wrote that individual judges can currently pause proceedings during emergencies but that their proposal would make sure all judges in any particular district could handle emergencies “in a consistent manner.”

There might be one, or possibly two, wee constitutional issues with this proposal, however. Giving judges the right to “pause court proceedings” by fiat seems pretty likely to violate the Sixth Amendment’s guarantee of a speedy trial. Moreover, if courts can administratively waive pre-arrest and pre-trial “rules of procedure,” what’s to stop them detaining citizens forever without charge? Or, heck, if we’re getting creative about suspending statutes, could a court just 86 those pesky “rules of procedure” about the right to have an attorney present during interrogation? You know, as a public health measure.

It seems for the moment, however, that we’re unlikely to find out, since Barr’s proposal met with bipartisan condemnation and is probably DOA.

On CNN, Progressive Rep. Alexandria Ocasio-Cortez described the process as “abhorrent,” accusing the DOJ of using the pandemic as an excuse to “encroach upon people’s civil rights.”

And if you can get Tea Party stalwart Mike Lee and liberal Democrat Patrick Leahy united against you, then it’s a safe bet your proposal is going nowhere.

To which Leahy replied, “I agree Mike.” And the crowd said, AMEN.