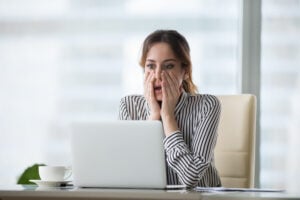 Someone whose online handle is “hlsperson1111” is almost certainly insufferable unless in some freak coincidence they’re a Hofstra grad. But since we all know this is really the kind of person who went to Harvard Law and now — years into practice — still feels this fact is central enough to his or her properly gender-neutral identity to employ it online we’ll take judicial notice of their insufferabilitude.

But the first step to overcoming any obstacle is admitting you have a problem, and our friend hlsperson1111 seems to be grasping toward self-awareness over at the Top Law Schools board:

I’m a senior associate at a big firm. Over the years, I have developed an abiding hatred of people using “Thanks” without a period in emails. I think it’s sloppy and sends a message that the sender doesn’t care enough about your time to include a period. I see it often from partners and other associates around my seniority, and I suffer in silence because it’s not really appropriate for me to pick a fight with them about it. But I now am at the point where I am supervising associates who use “Thanks” without a period, and it drives me up the fucking wall. Is it too petty for me to tell them to cut it out and that it’s a bad look?

Thankfully moderator QContinuum (a handle that marks a very different kind of insufferable) offered the final word on the matter:

Yes, it would be petty. Thanks

And while that was a perfect way to end, if there are any of you out there who sympathize with hlsperson1111, you should know that your frustration should be with your own inability to understand the vagaries of human language. In a recent episode of the podcast Lexicon Valley (which is a fantastic program), Columbia University linguist John McWhorter discussed a phenomenon of human language known as “softeners.” These are the little wrinkles in communication that people often subconsciously throw in to indicate to the listener that they shouldn’t misread a potentially harsh sentence. It’s the “could you open the door?” when you mean to communicate the directive “open the door.” These aren’t set in stone, but evolve as human communication evolves.

Written electronic communication has brought a whole new set of softeners from emoji to aggressive overuse of the exclamation point! And one other recent marker he mentions in passing is the technique of omitting a period to avoid giving the message a sense of brusque finality. And by recent, it’s worth mentioning that we’ve been talking about this softener for at least nine years now.

Ending a message with “Thanks.” today would be understood by many if not most online literate readers as a “don’t even try to respond to this until it’s handled you plebeian.” It’s just how communication is evolving… leave the period off if you don’t want people to think you’re a dick.