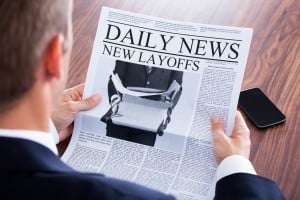 Are law firms laying off associates and staff as a sword or a shield in this COVID-19 pandemic? This question predicates on whether we are headed for another protracted recession a la 2009, or if ultimately this is just a short-term blip. The answer is a moving target; ultimately, we do not know how the virus will play out. Optimistic models hope for a swift return to normalcy, while more pessimistic counterparts forecast many more months of lockdowns. Regardless of the ultimate answer, firms are preparing for the worst case scenario, as they hope to avoid the same pitfalls that toppled Howrey and Dewey & LeBoeuf during the last recession.

Although the financial crisis is more closely associated with 2009 for Biglaw, the crisis actually started in the spring of 2007. It took time for the full brunt of the downturn to propagate to Biglaw. As we can see, the ratio for lateral moves to lateral leakage (attorneys existing Biglaw altogether) hit its nadir for partners in 2010, declining year for year starting in 2007.

Despite hitting its low point three years after the recession again, the market quickly resurged the following year as lateral movement increased relative to leakage. Associate movement is often a more sensitive barometer for market conditions as associate laterals take less time to execute and swarms of partners are insulated from recessions if they have strong portables or are in key practices. If we look at just associate leakage, and add further granularity to the best fit model, we see that market conditions actually started improving in 2010.

There is one caveat, this “growth” was driven not by an increase in appetite, but rather a decrease in associate layoffs.

Data supports the consensus that 2009 was the year of mass layoffs, as March of 2009 saw over 1,400 attorneys leave Biglaw altogether. Though associate movement increased a paltry 25 percent, compared to the 128 percent from 2010 to 2011, but the mass exodus of attorneys in 2009, seemed to assuage the concerns of most firms on their financial position.

The question on everyone’s minds is, what will firms do this time?

Generally the consensus is split; some firms are opting for austerity measures in the form of pay cuts and frozen partner distributions. These moves suggest that those firms believe this is a short-term crisis, and are deferring risk onto its members in a bid to avoid a repeat of 2009 style layoffs. The less optimistic firms are already resorting to layoffs and furloughs for associates and staff in hard-hit practice areas like M&A.

There will not be a one-size fits all approach, and the firms more diversified, especially in counter-cyclical practice areas like L&E, restructuring, litigation, and tax, are better equipped to weather the storm. Firms like Hueston Hennigan with strong litigation pipelines have actually announced bonuses instead of cuts, on top of their market-busting bonuses. Hueston Hennigan doesn’t need to address slowing corporate practices with highly paid M&A associates and partners waiting for deal flow.

We expect many of these firms to begin retooling their associates – something Lateral Link’s very own Jon Kahn experienced when corporate work dried up at Fried Frank when he started in 1990. Firms will continue to bolster practices with stable demand, and we expect to see the lateral market resemble a mosaic as demand increases for certain specialties (especially among partners) and demand otherwise slows for other practices and level of experience niches.

For those that don’t have the capabilities or flexibility to retool their associates, we expect to see layoffs as associates represent a fixed cost for the firms. Because partners are the profit drivers in the Biglaw model, and associates are either profit sources or cost centers depending on their billable revenue generated, firms will protect their partners as much as they can while coveting other firm’s profitable partners. Additionally, layoffs represent a proven financial tool to weather declines in profitability that saw success in the 2009 crisis.

A precipitous drop was avoided in 2009 as firms boosted their PPP by laying off associates in dry practice areas. The reduction in partner profits was offset by the reduction in fixed costs in the form of associate pay. Nonetheless, the move has long-term consequences as it handicaps the profitability and strength of a firm’s practice once it ultimately re-engages its cyclical practices. Though some firms have a head start on layoffs, ultimately we expect firms to opt for a more conservative pruning relative to the deep Edward-Scissorhandesque cuts we saw in 2009 to minimize the opportunity costs associated with hemorrhaging attorneys right before the market reopens.

With such granular demand that differs by specialty and experience, your best bet for making a lateral move right now is to team up with an experienced recruiter who can help you navigate this mercurial market. If you are a partner or firm chair interested in discussing the state of the market, I am happy to discuss what our full-service recruiting firm is seeing in the trenches. If you are a partner, counsel, or associate looking for lateral opportunities, our recruiters are happy to help you take advantage of unique market conditions to achieve your career and lateral goals.