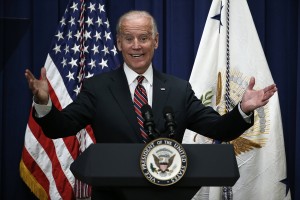 First of all, speaking of student loan debt, thanks to all of you who purchased the Your Debt-Free JD eBook last week. You’ve actually propelled it to being the number one new release in the admittedly obscure legal education category on Amazon. Cool. I’m really looking forward to hearing what some of you have to say once you’ve gotten through it, and to seeing some (hopefully five-star) reviews. I’m also working on getting Amazon to produce an on-demand physical, touchable, real-life paper version to assuage the surprising number of you who expressed an interest in that, so stay tuned.

Second, Joe Biden’s record on student loan debt really sucks. In the early 2000s, as a senator for the great State of Delaware, Biden fought mercilessly to prevent borrowers who fell on hard times from being able to discharge in bankruptcy student loan debt taken on from private lenders.

Now, keep in mind that Uncle Joe wasn’t talking about federal student loans, the kind of life-draining intestinal worms (uh, financially speaking) that most of us are familiar with. No, by the early 2000s, public sector student loans were already next to impossible to shed in bankruptcy, and had been for close to three decades. Biden, rather, was protecting those poor private sector lenders who were peddling a far more vampiric product and were, I’m sure totally coincidentally, some of his largest campaign contributors at the time.

Biden’s early 2000s argument was that too many people, flush with overconfidence from obtaining an education, were discharging their student loan debts too easily. This supposedly caused interest rates to rise for everyone else. And to be fair, that was a more widely held view back then. But it wasn’t a particularly good widely held view, even at the time. There were already lots of safeguards in place to keep people who could afford to pay off their private student loan debts from frivolously discharging them. These were called “bankruptcy judges,” and they would, you know, “judge” whether people’s private student loan debts should be discharged.

At a 2001 hearing, Joe Biden said that he and his sons took out large commercial student loans to get through law school and didn’t discharge said debts, but instead worked hard to pay them off. “Something is wrong with a system that allows guys like me getting out of law school discharging our law school debt front-end,” Biden said at the time, ignoring the fact that the system did not in fact allow a guy like him to discharge his debt, which anyone with ears had just heard him complaining about. At this same hearing, Biden additionally told a bankruptcy judge who was testifying that he was “fully [sic] of malarkey.” Neat.

Ultimately, Biden led a handful of Democratic defectors in support of the Republican bill that became the 2005 Bankruptcy Abuse Prevention and Consumer Protection Act. Ever since, private student loan borrowers who qualify for bankruptcy have nevertheless largely been unable to discharge the sums they own to private financial institutions. Far from reluctantly supporting the bill in order to temper its cruelest provisions, as he has since tried to frame it, Biden was actually an enthusiastic cheerleader.

Maybe none of this matters. Now, Biden strongly supports making it financially feasible for more Americans to afford the higher education they need to compete in the global workforce. With all the remaining major presidential candidates pushing 80, it doesn’t seem fair to run the better part of a century through the bullshit Democratic purity test gauntlet. Lord knows I said some dumb stuff back in 2001 myself, such as, “Yes, I do want to go to that Sugar Ray concert.”

One thing I can guarantee though is that whatever Biden does with student loans in the future, it’s going to be a hell of a lot better than what Trump has done and will continue to do over the next four years if he’s re-elected. I just wish Biden would get a little better at owning his mistakes. If Biden really wants to be the anti-Trump, perhaps a good way to demonstrate the contrast is to at least occasionally admit a past error.