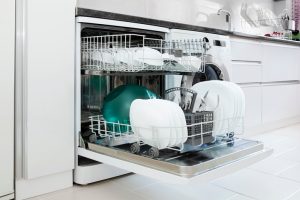 A dishwasher: a household convenience … or the first step into madness?

I don’t think as a society in general, or as a profession in particular, we spend enough time openly discussing our fears. I’m not talking about the way my dad becomes a surprisingly agile septuagenarian every time a harmless little garter snake pokes its head out from beneath his shed. No, I’m talking more about intangible fears. Things like that lump in my stomach I get by the end of every pro bono legal advice clinic, when I can’t keep pretending that two-thirds of the attendees don’t really have a legal problem but just have no one else in their lives to talk to. I dread that fate.

It’s not only outliving my friends and loved ones or slowly alienating them over time that frightens me. For better or for worse, I also have a big dose of that fear of becoming unrecognizably domesticized. So many of the people I know desperately value a big, clean house, a well-kept yard, nicer vehicles, and better appliances than all the neighbors. I just can’t get myself to care about that stuff. I ride around on my 1997 Honda Shadow, when I want, where I want. I travel to places like Havana and Vietnam and New Orleans on a series of whims. I crack open my laptop when I can’t sleep at 2 a.m. to tap out a screed on some obscure matter I’ve deemed of national importance. I don’t bother to scrub my floors — what’s the point? They’ll just get dirty again, and I have thoughts to think.

I’m paralytically afraid I might wake up someday to find all the things I care about displaced with worries over backsplash and landscaping projects. So, it was with something approaching mild courage that I bought my girlfriend a new dishwasher for her house this Christmas. It was some major ground ceded to the Wolf domestication lobby.

We went to Best Buy, and really took our time picking out something she liked. She went with one of the higher-end models, a sleek stainless-steel thing at $749.97 that came with “free” delivery and installation. “Hey, that’ll be convenient,” we reassured each other. We were a little disappointed that the earliest date they could send an installation guy was some three weeks later, but good things come to those who wait, right?

We waited the three weeks and change, with me getting no fewer than five texts reminding me of the installation appointment. The last of these, on the day of, said the installer was “on the way.” Only then he wasn’t, according to a sixth text. Well, it was snowing pretty hard the previous evening, these things happen. I went into the store again and got the installation rescheduled. Now I had to take another half of a day off from work to get within the alarmingly vague time window they give you, and, this time, the guy at least showed up. However, when he showed up, he took the lower panel off the existing dishwasher, frowned, spent some time rooting around above the ceiling tiles in the basement, and then informed me that he couldn’t install the new dishwasher until we paid a plumber to come do some thing he wasn’t qualified to do. He did dump the new boxed dishwasher off with me though, and stole the panel from our old one for some reason.

Well, I called Best Buy and got no help. The lady I reached didn’t even ask for my name or order number, just told me to call a plumber and that Best Buy wasn’t paying for any of that. I did call a plumber, but couldn’t get anyone over to the house immediately. A few days later, I get another text from Best Buy saying our “free” installation had been cancelled entirely. After several more phone calls to Best Buy, and several more times of explaining the whole situation, I was told I had to go into the store to reschedule the installation because this couldn’t be done over the phone without incurring a new $160 charge. I was also told there was only a 15-day return period after the inert thing was dropped off against my will, which of course wouldn’t be nearly enough time to get a plumber over there or to reschedule the installation.

I talked it over with my girlfriend, and I finally threw in the towel. I could have purchased several dishwashers, or, you know, something that wouldn’t drive me completely insane, had I been able to bill for all the time I spent on this ordeal of not getting a dishwasher. Supposedly the damn thing is in the process of being returned now, and they’re coming to pick it up (another half day wasted), and Best Buy will issue me a refund when they get it back. I have my fingers crossed. I reached out to Best Buy’s press office for comment on this story, and found them about as responsive as their customer service line, so I’m trying not to get my hopes up.

And so, my fear of domestic bullshit proved warranted. I just don’t see how this nice new domestic shit that you can’t actually buy without giving yourself an aneurysm is supposed to make your life better. Maybe I’ll try again in a couple years. Until then, give me a honk if you pass by me on my motorcycle, and hopefully you’ll come along with me for a few more 2 a.m. screeds.