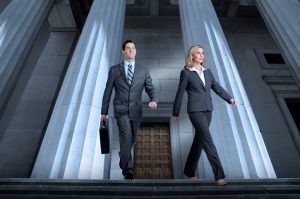 The Senate appears ready to reject witnesses and new evidence today in the impeachment of President Donald Trump, but lawyers who swore to “protect and defend the Constitution” when they were admitted to the bar stand at the ready to demand that senators uphold their oaths to “do impartial justice according to the Constitution and laws” that they swore to in connection with this trial.

Today, Lawyers for Good Government, along with Lawyers Defending American Democracy, Lawyer Moms of America, and Demand Justice will join together in solidarity to protest on the steps of the Supreme Court in an effort to demand that every United States Senator fulfill their duties and obligations to our country.

Hundreds of lawyers will walk to the steps of the Supreme Court where they will symbolically “file” this 95-page document — an open letter to the U.S. Senate and all Americans, accompanied by assorted materials on impeachment and the Constitution — by stacking one on top of the other, to eventually form a towering pillar. They will then hold a press conference next to the stack of documents to explain why it’s so important for each and every senator to “do impartial justice.”

Here’s an excerpt from the open letter:

Senators: Your duty to “do impartial justice” as judges and jurors in trying the impeachment of the President of the United States is a grave responsibility. Of all 330 million Americans, this duty rests only on the 100 of you.

The American people are depending on you to uphold your oaths and “do impartial justice” as you swore to do. Your actions as jurors in the impeachment trial of President Donald Trump will be judged by the American people. The impact of your actions will be felt not only by those alive today, but by future generations of Americans.

If you’re unable to attend the protest event today but would like to add yourself as a signatory to the open letter, you may do so here.

The protest will be livestreamed from the Lawyers for Good Government Facebook page, starting at around 12 p.m. We will provide an update here with video if possible.’

Join your fellow lawyers today — in any way possible — to demand “impartial justice” in the impeachment trial of Donald Trump. The nation is counting on you.