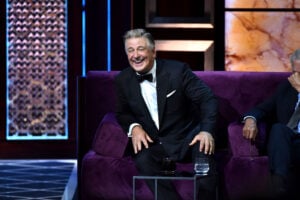 Alec Baldwin received one of the nicest holiday gifts you can get if you are a public person: a Manhattan judge dismissed a slander claim against him. Happy Holidays, Best Jack Ryan.

Baldwin was sued for slander and assault & battery after a 2018 parking dispute. Baldwin claims Wojciech Cieszkowski… stole his parking spot. Cieszkowski claims that Baldwin shoved him and punched him.

Losing a parking spot is, like, a thing that happens to us “regular” people all the time in New York. Well, not to me. When I drive the family in for a day in the city, I use a parking garage. Because paying $55 to park for an afternoon is preferable to maybe parking where Alec Baldwin wants to.

Judge David Cohen ordered both Baldwin and Cieszkowski to appear for a preliminary hearing in February over the alleged assault & battery (Baldwin claims he merely shoved Cieszkowski, but didn’t punch him). But Judge Cohen tossed Cieszkowski’s defamation suit, which stems not directly from the parking incident, but from smack-talk Baldwin laid down on Ellen. Yes, the only thing that would make this story more “New York” would be if Chris Rock saw the whole thing go down on his way to a Mets game, but was distracted because Anthony Weiner sent him an unsolicited dick pick right as Baldwin started punching the guy.

The slander claim centered on comments Baldwin made in February on Ellen DeGeneres’ show in which the actor said, “I thought he was going to run my wife over with his car when he was stealing my parking spot” and similar comments on Howard Stern’s show in March, according to the documents.

The judge wrote in his order that Baldwin’s comments that Cieszkowski allegedly drove fast and aggressively did not rise to the level of accusing Cieszkowski of a serious crime.

“They constitute every day words used to describe driving by the public,” Cohen wrote.

I accidentally cut somebody off when I was making a left early this year: the dude raced to catch me at the next stop light, got out of his car, pounded on my window (I rolled them up when I saw him coming), noticed my kid in the back seat, and screamed “You’re lucky you have your kid with you or I’d kick your fucking ass.” I thanked him for respecting my child and drove away. That man was not Alec Baldwin, but if it had been I wouldn’t have told you because who needs the aggravation.

Be safe out there.