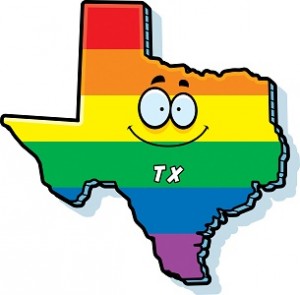 Are rainbow flags the same as swastikas or Confederate stars and bars? Asking for the Texas State Commission on Judicial Conduct, which just forced Judge Rosie Speedlin Gonzalez of Bexar County Court 13 in San Antonio to get rid of her pride flag after a complaint by a local attorney.

While the complaint has not been made public, criminal defender Flavio Hernandez told the San Antonio Express News that it was a simple question of fairness. How could he “in good conscience” subject his clients  “to the implied authority of this unofficial flag symbolizing the Judge’s personal bias?”

“Other flags expressing personal bias such as white supremacy (swastikas), or black slavery (confederacy) are also divisive and inappropriate symbols in our courtrooms,” Hernandez told the paper. “I may not be able to turn the dark tide of legalized immorality infecting our nation like a virus, but in my small way, I voiced my support of traditional American family values.”

That’s an odd analogy at a time when an actual pandemic virus is infecting the nation. But more to the point, I BEG YOUR PARDON??? If Mr. Hernandez was willing to express such naked bigotry to the media, exactly what did he say in the complaint to the Commission on Judicial Conduct? And if he didn’t allege any actual bias by Judge Gonzalez, the first openly gay judge elected in Bexar County, then why exactly did the Commission force her to remove not just the flag, but a rainbow pin, pen, mousepad, and eyeglasses, in addition to a Mexican serape?

Gonzalez told NBC that one county judge displays an Irish flag, while another wears a camouflage robe in the courtroom, without bringing down the ire of the Commission. There is even a rainbow on the wall of the family courtroom.

“If you don’t tell them to take their rainbows down, then it’s not about the rainbow, it’s about me,” she told NBC.

Gonzalez is appealing the Commission’s ruling.

“Judges all over the state of Texas have a right to express their First Amendment rights. They don’t lose that right when they become elected,” her attorney Deanna Whitley told the Express. “Judges might have a Mothers Against Drunk Driving emblem or they might have a cross or they might have a Bible or a flag with a thin blue line. There was no showing that Rosie was, in any ruling, biased in favor of or against anyone.”

The Express editorial situates Judge Gonzalez’s reprimand within a larger struggle between the Commission and the state’s anti-LGBTQ leadership. Columnist Gilbert Garcia writes:

Last November, the commission sanctioned Dianne Hensley, a Waco justice of the peace who had defied federal law by refusing to conduct same-sex weddings, even though she performs weddings for opposite-sex couples.

In response to that sanction, two voting members of the commission who were awaiting Senate confirmation found themselves summoned to meetings with Gov. Greg Abbott’s staff. Abbott subsequently withdrew their nominations.

Attorney General Ken Paxton, like Abbott an opponent of LGBTQ rights, refused to defend the commission in the lawsuit that Hensley filed against it.

So it looks like the commission bowed to anti-LGBTQ forces with a private warning to Gonzalez that it hoped would get no media coverage and would make the whole flag issue go away.

But Judge Gonzalez and her flag are not going away.

“I have no intention of being bullied off my bench,” she told NBC. “The conservative leadership needs to acknowledge we are a diverse state and things need to change.”

For now her pride flag sits outside her chamber door. Because putting it on the back of the courthouse transport bus would probably be just a little bit too on the nose.’