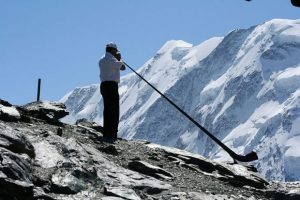 When traveling, I cannot escape the study of trusts and estates and how its tenets pervade every culture’s art and economics. For example, in Paris, I had to visit Dante and Virgil, a painting by William-Adolphe Bouguereau, that depicts the drama surrounding the creation of a counterfeit last will and testament. In Italy, I reveled at the Synagogue of Florence whose magnificent building was funded by an estate as noted under a last will and testament, a copy of which is on display. More locally a jaunt to Miami provided its own study of the famed Fontainebleau Hotel and its family litigation.

Traveling to Switzerland is sensory overload in multiple ways. Its natural beauty and  picture-perfect scenery are indisputable. As a trusts and estates attorney, I find the location enticing because of its banking history and continuing debates as to whether trusts, recognized in Switzerland as a valid legal form since the Hague Trusts Convention, should also be included within the Swiss domestic legal framework.

On my recent trip to Switzerland, another  matter, concerning to all individuals, not just trusts and estates attorneys,  arose as I learned on a train from Luzerne to Interlaken that Holocaust survivor, Greta Beer, had passed away at the age of 98. Beer, a Jew born in Czerowitz, Romania, was known for her continued search and fight for her father’s Swiss bank accounts which, in turn, led to Switzerland’s payment of more than $1 billion to Holocaust victims and families.

Beer’s father, Siegfried Deligdisch, was a wealthy textile manufacturer. He deposited monies in Swiss bank accounts because of the banking secrecy laws in order to protect the funds from the Nazis. He died in 1940 without revealing the name of the Swiss banking institution or any associated numbers. Greta Beer spent World War II, first hiding in the Carpathians with her mother, then fleeing to Hungary and, finally, in a facility for dispatched individuals in Vienna, where she married her husband, Simon Beer.  She came to the United States via Italy in 1951 as a stateless refugee. In the 1970s she returned with her mother to Switzerland, to try to find the monies her father has deposited decades before. She was faced, however, with rejection by the Swiss banking system which refused to assist her in her search or pay her any of the monies.

In the 1990s, an independent commission was launched to investigate Swiss banking practice during this time. Among many items, the  commission identified 50,000 bank accounts held by Holocaust victims, when the Swiss had claimed fewer than 1,000 were in existence. At this time, the Swiss government also asked for an investigation into Swiss actions during World War II.

In 1996, Beer testified before Congress about her experiences in trying to collect her father’s moneys and the  Swiss banks’ actions in response. As a result of her involvement, a $1.25 billion settlement was reached as a result of a class-action suit brought against the Swiss banks.

Although Beer was never able to identify her father’s accounts, in 2002 when distributions from the suit commenced, the first check of $100,000 went to Beer in recognition of her services and efforts to recover the monies for the Holocaust victims.

Surely Greta Beer has left a legacy larger than numbers. Her efforts to assist all Holocaust survivors, following the war, will be remembered as that which she helped to recover will be reinvested for many years to come. This is the kind of legacy that trusts and estates attorneys wish for all of their clients.