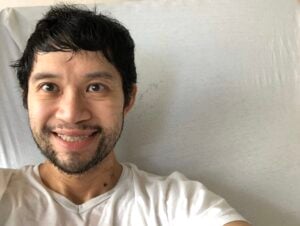 My hospital bed selfie on my day of discharge.

Greetings, dear readers. It’s David Lat, founding editor and current columnist here at Above the Law. I hope you are all weathering the current storm well.

There’s so much news to discuss within the legal world, especially in terms of how various sectors of our community — including law firms, law schools, and courts — are dealing with the coronavirus crisis, as well as its associated economic fallout. But I will invoke my privileges as “editor emeritus” and talk about … me, if that’s okay.

As some of you might have seen — in this story by Kathryn Rubino, this column by Steven Chung, or on social media (if you follow me at @DavidLat) — I have spent much of the past month or so battling coronavirus. And it has been quite the battle.

It all began around the weekend of March 7-8. I felt a bit out of sorts, intensely fatigued. But at that point in time there weren’t even 50 confirmed cases in New York City (a city with a population over 8 million), making the idea that I could have coronavirus seem far-fetched.

By the following weekend, March 14-15, my symptoms had worsened to include fever, chills, and most disturbingly of all, difficulty breathing. And the number of cases had increased, making me think that perhaps I did have COVID-19.

I went to the emergency room at NYU Langone Health on Sunday, March 15, in the hope of getting a coronavirus test, but the stories are true: it’s very difficult to get tested. I was told that due to the limited number of testing kids and CDC guidelines, I could not get tested for COVID-19.

I was given a cold/flu test that day to see if my symptoms could be a result of a common strain already out there, as opposed to the novel coronavirus. Having a negative cold/flu test is, along with having traveled to certain countries or interacted with a known carrier, another path to getting tested. My cold/flu test came back negative, meaning that my symptoms were caused by something else (cough cough, coronavirus) — but I was nevertheless told to go home and return tomorrow to be tested for COVID-19.

My symptoms worsened overnight. By the time I returned to the ER the next day, Monday, March 16, I could barely walk or even stand. I remember needing to support myself on the counter as they conducted patient intake. I was admitted to the ER, given emergency oxygen, and (finally) given a coronavirus test — which came back positive in short order.

I’m writing a longer essay about by COVID-19 experience (which I’ll post on my Twitter feed once it’s published), so I’ll offer an abbreviated version here. I spent the next 17 days in the hospital — including almost a week in the intensive care unit, hooked up to a ventilator. Early research suggests that the majority of coronavirus patients who get put on ventilators don’t survive, but I was one of the lucky ones; I made it. After getting off the ventilator, I spent another week or so in the hospital, getting supplemental oxygen and learning how to breathe again. I was discharged on April 1 — April Fools’ Day — but my COVID-19 struggle was no joke.

(For more on my coronavirus battle, see this segment from yesterday’s Today Show, when my husband and I spoke with Savannah Guthrie — my fellow lawyer turned journalist and Zach’s fellow Georgetown Law grad — about what we went through.)

So how does this relate to Above the Law? Over the past few weeks, as I have fought my very public battle with coronavirus — which I have discussed openly with both traditional media and over social media — I have been overwhelmed by an incredible amount of support. I’m guessing that thousands of people were praying for, thinking of, or otherwise pulling for me — and a sizable portion of those people have been members of the ATL community. I can’t count the number of supportive calls, texts, emails, tweets, Twitter DMs, Facebook messages, and LinkedIn messages that I have received during my difficulties from ATL readers, sources, sponsors, and supporters.

At its heart, Above the Law has always been about community. And when we go through difficult experiences — such as the Great Recession, which ATL covered in great detail, and our current crisis, which ATL now chronicles — community becomes more important than ever.

My struggle has been difficult. And it’s far from over; I’m still very weak, with a lot of recovery ahead of me. I have a residual cough, my voice remains very hoarse (from the ventilator), and I get winded from walking across a room or up a flight of stairs.

But I do think, knock on wood, that the worst is behind me. And from the comfort of a couch in my parents’ house, where I’ll be spending the next few weeks of my recovery, I’d just like to say to the Above the Law community: thank you.

I don’t know that my family and I would have made it through this ordeal without your support. And I will always, always be grateful.

David Lat, the founding editor of Above the Law, is a writer, speaker, and legal recruiter at Lateral Link, where he is a managing director in the New York office. David’s book, Supreme Ambitions: A Novel (2014), was described by the New York Times as “the most buzzed-about novel of the year” among legal elites. David previously worked as a federal prosecutor, a litigation associate at Wachtell Lipton, and a law clerk to Judge Diarmuid F. O’Scannlain of the U.S. Court of Appeals for the Ninth Circuit. You can connect with David on Twitter (@DavidLat), LinkedIn, and Facebook, and you can reach him by email at dlat@laterallink.com.